Tales of bloodsuckers, pesticides, and sleep 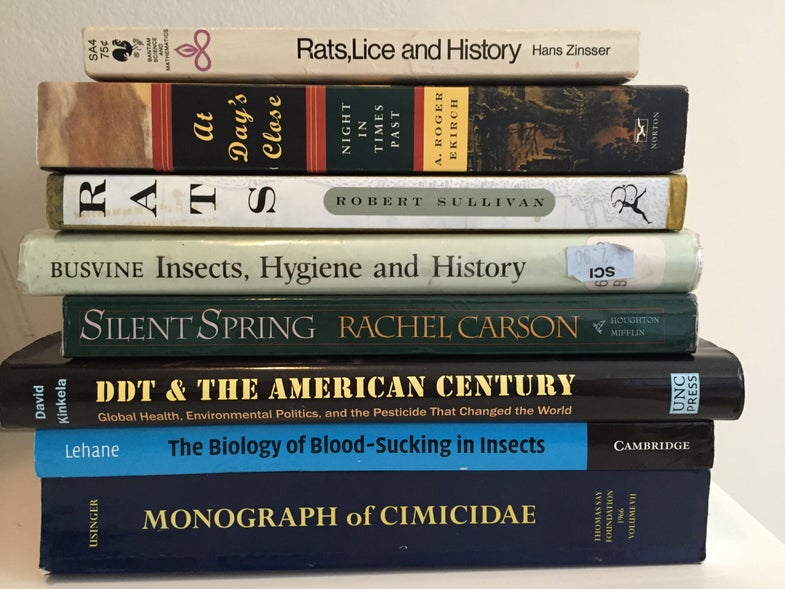 It’s June, the month of summer reading lists, and Our Modern Plagues is jumping on the trend. But rather than offering the latest and greatest releases, my list includes books that either inspired or informed me while I was writing Infested: How the Bed Bug Infiltrated Our Bedrooms and Took Over the World. These are books about pests, bloodsucking beasts, and pesticides—perfect for the beach!

Hans Zinsser was a bacteriologist and this was his first book for a popular audience, but it’s a classic and entertaining read. The book synthesizes science, philosophy, history, and art into a glorious tale of rats and lice. The book also contains my all-time favorite footnote, which marks the word “saprophyte”: “If the reader does not understand this word, it is too bad.”

(I won’t make you look it up. A saprophyte is an organism that pulls its nutrients from dead or rotten matter, such as certain funguses or plants.)

This epic history of sleep in the age before electricity—in the Western world, anyway—helped me understand the roots of a shared fear of the night. Bed bugs are among a long list of real and imagined demons that we feel threatened by when the sun goes down. Among my favorite bits is Ekirch’s description of bug hunts, in which families picked through their bedding for the “unholy trinity” of pests: lice, fleas, and bed bugs.

Rats: Observations on the History and Habitat of the City’s Most Unwanted Inhabitants, by Robert Sullivan (New York: Bloomsbury, 2004).

This lovely book tells the history of New York City through the Norway rat, that same grayish species you see running down the subway tracks or squeezing through impossibly narrow spaces. In some of my favorite chapters, Sullivan dons night-vision goggles and hunkers in a small alley downtown to observe rats in their natural habitat at night. When I pulled my copy from the shelf to put together today’s post, I found an old bookmark inside: an Amtrak ticket stub from my first reporting trip for Infested.

This book takes a little patience, but for me it was well worth it to learn about the science, history, and literary art on biting pests, including bed bugs. Busvine, an entomologist from the London School of Hygiene and Tropical Medicine, spent around twenty years on the book and dug up many gems.

Among my favorite passages: “Of most immediate appeal, no doubt, are the curious human reactions to these intimate little pests, throughout the ages. Just as archaeologists can reconstruct a bygone culture from surviving fragments of trivia, it is possible to learn much from human attitudes to insect vermin. Hints of their prevalence will illuminate aspects of social habits, and of modes and manners. They will provide literary curiosities as symbols of piety, of love, of human insignificance.”

The bed bug’s story is incomplete without mentioning DDT, and no story about DDT is complete without Silent Spring. I read this book at least twice while writing Infested and have dug through specific parts many times since. I’m always struck by how much we overused DDT and other pesticides, as well as Carson’s call for biological controls. One passage that I think about a lot is this: “It is not my contention that chemical insecticides must never be used. I do contend that we have put poisonous and biologically potent chemicals indiscriminately into the hands of persons largely or wholly ignorant of their potentials for harm.”

(If this sounds familiar, it’s because I’ve written about the passage before.)

DDT and the American Century: Global Health, Environmental Politics, and the Pesticide That Changed the World, by David Kinkela (Chapel Hill: The University of North Carolina Press, 2011).

It’s tough to find an unbiased history of DDT. Many accounts either sway one way or another politically: at one end, there are the Carson haters who call her a murderer, who argue that the DDT ban caused malaria-related deaths in Africa, and at the other end there are those who use the book to call for an end to all chemical pesticides no matter what. Kinkela, a historian at the State University of New York at Fredonia, offers a clear-eyed and thoroughly documented account of the insecticide.

The Biology of Blood-Sucking in Insects, by Michael Lehane (Cambridge: Cambridge University Press, 2005).

This is a science text, but it’s an easy read and gives great insight into the biology and evolution of bloodsucking insects, as well as their relationship to pathogenic microbes. Plus, the cover boasts a scanning electron micrograph of a public louse. Yes, that’s right: as in crabs. What better way to ward off unwanted attention on the beach than flashing a high-def image of a sexually transmitted parasite?

This is another science text, and it’s not for the casual reader. But it is the most comprehensive book on Cimicidae, the insect family that includes bed bugs and their cousins, from the bat bug to the poultry bug to the swallow bug. Usinger spent around 17 years on the project, which included six expeditions spanning five continents (a lively, if disjointed, description of these adventures can be found in his autobiography). Usinger’s work played heavily in Infested, and his travels even inspired my own trip to Eastern Europe, where scientists are continuing some of his research.