Identifying the Cornerstone of a Biofilm

Staphylococcus epidermidis uses a small protein to start and keep its colonies intact. 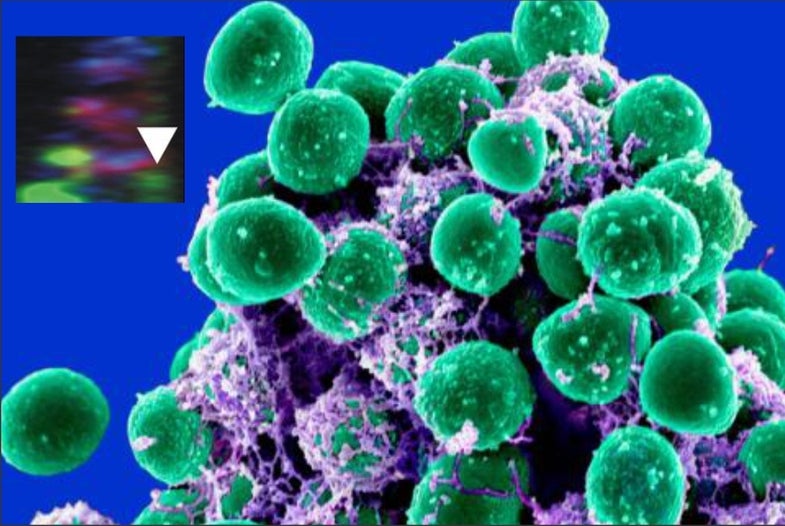 Biofilms are incredibly fascinating structures although for public health officials, they pose a significant threat. The formation of a bacterial colony either on human tissue or inanimate objects can lead to significant problems in the form of healthcare associated infections. Even the most harmless member of the environmental microbial community can become a potential killer should it be found on medical devices such as catheter.

The problem with biofilms, other than the fact they house potentially millions if not billions of bacteria, is their ability to resist common cleaning and disinfection procedures. This is due to their rather complex chemistry which is not only limited to cells but other extracellular matrices including sticky polysaccharides, strong-binding proteins, and extracellular genetic material, which is quite possibly one of the most stable materials on Earth.

With all communal structures, a base or cornerstone is needed to trigger construction and ensure proper formation. The same exists for a biofilm. One particular molecule is usually responsible for determining the best site for a new colony as well as organizing the rest of the cells to begin the formation. For a public health researcher, identifying this cornerstone is important as it may spark a path towards prevention strategies and mitigation protocols for proper disinfection.

Some of the triggers for significant healthcare-associated pathogens have already been discovered. For one of the most studied biofilm-constructors, Pseudomonas aeruginosa, the key is a polysaccharide, which is deposited onto the chosen site. In Clostridium difficile, initiation is partially controlled by a transcription regulator called Spo0A. When expressed, the bacterium begins to form colonies. When repressed, these structures tend not to form. Another group of potentially problematic bacteria, mycobacteria, use lipids to hold themselves together.

Now an international group of researchers have added another trigger to the list. Last week, the team published the discovery of the cornerstone to one of the most prevalent bacteria in human life: Staphylococcus epidermidis. This bacterium is part of our normal skin microbial flora, yet should it get into our bloodstream, it can be a potential killer. This species has the ability to form biofilms particularly on inanimate surfaces such as catheters. This can allow for inadvertent introduction into the blood and/or urinary tract and cause disease. It is recognized as a growing player in clinical disease and even in the development of antibiotic resistance.

The team wanted to first seek out whether a trigger could indeed be found. They took crude biofilm formations and separated the individual components. They found several interesting proteins including one not yet characterized. It was a hypothetical entity known simply as YP_187866. With the clue in hand, the team went in search of this protein in the hopes theory could be solidified as reality. Their effort was rewarded with the identification and isolation of the mysterious molecule, which they dubbed Small basic protein (Sbp) due to its low molecular weight of 18 kilodaltons.

The next step was to develop antibodies to the protein, which they did in rabbits, and then find out if the molecule was involved in biofilm formation. The team found Sbp was extracellular in nature although it tended to attach to the walls of the bacteria. The result suggested the protein played a role in giving the bacteria the stickiness needed to attach to one another during the initial stages of biofilm development.

The next step was to prove the role of Spb in biofilms. They did this by comparing normal bacteria with those incapable of producing the protein. The team found a lack of Spb resulted in an inability to form colonies. Further analysis revealed it acted as a scaffold protein, in which cells were brought together in the initial stages of formation to build a base. After a solid foundation was made, other cells could come into the mix and join in to form a three-dimensional structure.

There was one final function attributed to Sbp and biofilm formation. It affected the production of another major component of S. epidermidis biofilms, polysaccharide intercellular adhesin, or PIA. This molecule is involved in giving the biofilm both elasticity and a stable, three-dimensional shape. When Sbp was present, the PIA concentration was normal; when the small protein was absent, PIA levels decreased. This suggested not only was Sbp linked genetically to PIA but also was involved in maintaining the biofilm matrix. In essence, Sbp was not only a cornerstone but also a lynchpin.

The results of the study reveal the importance of Sbp in S. epidermidis biofilm initiation, formation, and maintenance. The data also suggest this protein may be for future infection prevention regimes either through enzymatic disinfection or more technologically advanced means in which the molecule is blocked. Sadly, the authors could not definitively say whether stopping Sbp would entirely prevent infections by this bacterium. Yet, they did suggest this offers a path forward to both understanding how this normally friendly bacterium can turn against us and how we may be able to prevent problems in the future.