IBM Chips Could Make Your Smartphone Think Like A Mouse

No reports of finding cheese in mazes, yet 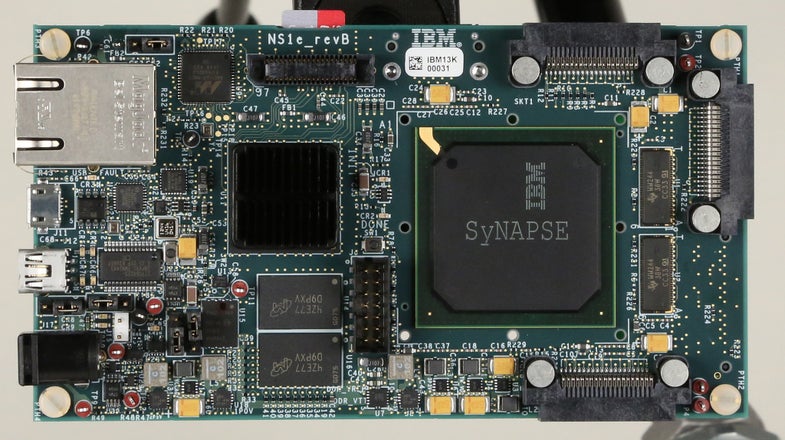 Last year, IBM introduced TrueNorth, a high-powered, low-energy-consumption chip inspired by the human brain. At the time, IBM compared it to ENIAC, the earliest iteration of a general computing machine.

IBM has taken that technology over the last year and magnified it, creating the computational equivalent of a mouse’s brain, according to an article in Wired.

This network of TrueNorth chips is made of 48 million artificial nerve cells (48 chips housing 1 million artificial cells each), and is designed to run deep learning algorithms with greater efficiency. They call the chips “neuromorphic,” meaning they mimic organic brain cells. These algorithms are the backbone of current artificial intelligence platforms—software like Facebook’s image recognition and Google’s Translate app, that visually recognizes and translates text.

Networks of artificial neurons like the one built with TrueNorth will allow that level of computation in small devices like phones or watches, IBM told Wired. That’s because its most attractive feature, aside from computing power, is low energy consumption—just about 70 milliwatts powering 5.4 billion transistors. Modern processors have around 1.4 billion transistors and take far more energy, between 35 and 140 watts.

And because the chips don’t rely on a traditional chip architecture, IBM has had to create an entirely new programming language and set of software for the chips to work.

The TrueNorth project is a conglomeration of funding from DARPA and IBM, and the project spanned the work of more than 200 collaborators, eight IBM labs and five universities.