How Mummifying Mice Will Help Push Study Of Ancient Cancers 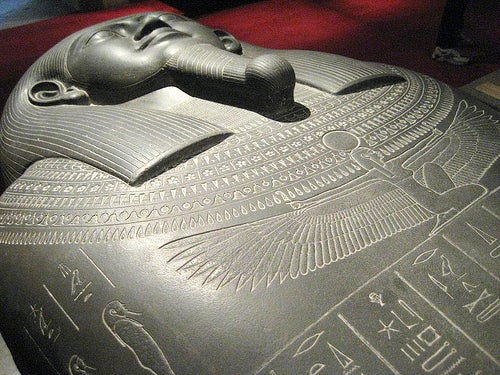 Doctoral student Jennifer Willoughby mummified tumor-striken and healthy mice, in an effort to find out how easily identifiable tumors are in mummies. Tabni / Wikimedia Commons
SHARE

Humankind has been getting sick since, well, the beginning of humankind. And that means that one way to progress in fighting illnesses, specifically cancers, could be to study how it affected us in the past.

Jennifer Willoughby, a doctoral student in bioarchaeology at Western University in London, Canada, decided that she would like to study tumors in ancient Egyptian mummies. But before she did that, she would have to figure out how easy it would be to spot the tumors.

So she sent away for some laboratory mice, some with tumors, some without. (Okay, it’s not a mail-order catalog, but you get the gist.) Some of them she buried in a hot, sandy terrarium to observe a more natural mummification process.

For the others, she followed an ancient Egyptian mummification process to a tee. She removed all the internal organs (except the tiny brains that were hard to get to) filled the bodies and covered them with natron, the dehydrating chemical Egyptians used on their own mummies, and let them sit for 50 days.

Afterwards, she dipped them in pine resin, wrapped them with linen and beeswax, and even anointed them with frankincense and myrrh, with a prayer.

When the mummification was complete, she took all the mouse mummies to a tomography scanner, and as she announced at the World Congress of Mummy Studies in Lima, Peru, today, the tumors were obviously apparent. This means moving on to study human mummies could in deed hold answers to what cancer was like for ancient peoples.