How to go supersonic without a boom

Breaking down the AS2 business jet 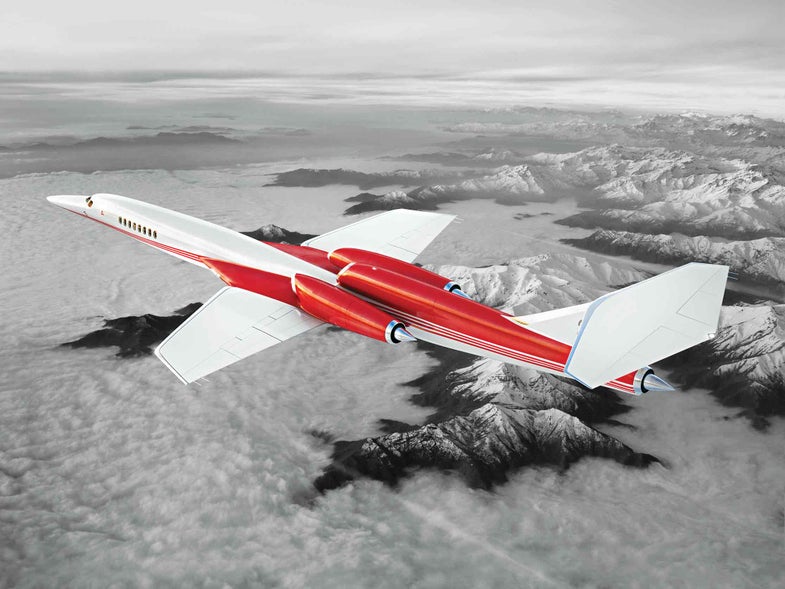 Until its retirement 13 years ago, the supersonic Concorde was plagued by two major problems: inefficiency and noise (the sonic booms it produced got it banned from over-land cruising). Now, heavyweights like Virgin and Airbus are planning to tackle supersonic speeds, and NASA began designing a “low boom” supersonic jet this year. But no one is as close as aircraft manufacturer Aerion Corporation, which is developing the AS2.

When air molecules slam into a supersonic jet, they create a high-pressure wake that reaches the ground as a startling “ba-boom.” By slowing down its cruise speed to Mach 1.2 (the Concorde’s was Mach 2), the AS2’s wake will dissipate before it reaches civilization.

Typical supersonic wings sweep back to create a triangular shape. That design creates lift—but also drag-producing air eddies toward the back of the wings. The AS2’s wings jut straight out from the fuselage and, thanks to ultrastrong carbon fiber, have a thinner contour. This lets air travel in straighter lines, reducing overall drag by about 20 percent.

The AS2’s 170-foot-long fuselage pinches in at the wings, creating an elongated Coke-bottle shape. This allows for smoother airflow around the body while still providing room in the cabin for passengers and crew.

Instead of building expensive custom engines, Aerion plans to adapt commercially available ones for supersonic flight. The engineers will reduce the diameters of the big engines’ fans so their sound at takeoff and landing will meet airport noise standards—without losing the power needed to achieve supersonic flight.

This article was originally published in the November/December 2016 issue of Popular Science, under the title “How to Go Sonic Without a Boom.”