Maggots Raised On Chicken Blood Could Save Darwin’s Finches

Conservation can be gross 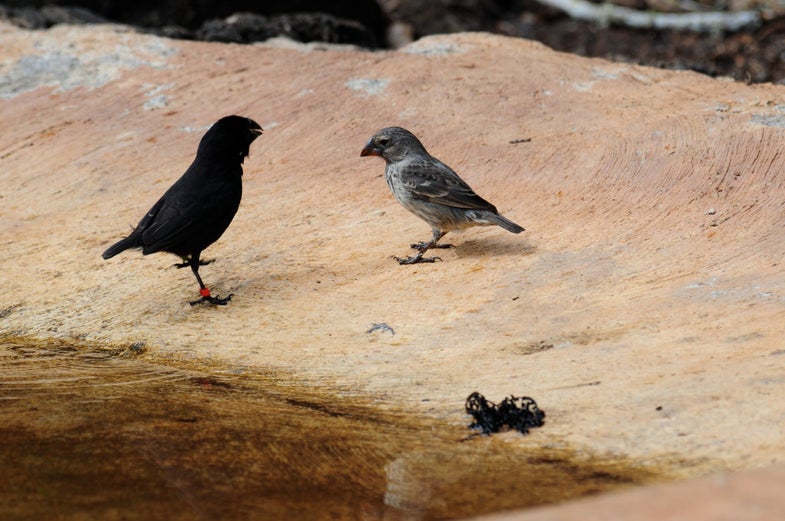 A Medium Ground Finch in the Galapagos. Vince Smith
SHARE

The alien invader started with the youngest and most vulnerable in the population. The infant beaks were an open invitation beckoning its own wriggling young towards an ideal food source.

It sounds like a horror story, but it’s just the life cycle of Philornis downsi, a fly species whose young larvae (maggots) feast on recently hatched finch chicks in the Galapagos.

The flies aren’t native to the fragile ecosystem that was famously described by Charles Darwin, whose observations of the finch populations catapulted him to scientific fame.

In a paper published in the Journal of Insect Science, researchers describe a novel way for conservationists to fight back against the maggots and save the finches.

There is a popular idea in the conservation community that releasing sterilized, lab grown flies into the ecosystem might eliminate these pests. The idea is that the natural flies will mate with the sterilized flies, producing no young. Eventually, the forced sterilization will wipe out the flies, saving the finches.

The only problem is growing the sterilized maggots in the lab. Their preferred food source is young finches from imperiled populations, which doesn’t really help the whole conservation idea. So the researchers came up with another idea; raise the maggots on chicken blood.

So far, it seems to be working. The maggots are thriving on the alternate food source, giving researchers hope that one day down the road, this method could be used to help save the finches.