Turning the heat up on this frigid space rock 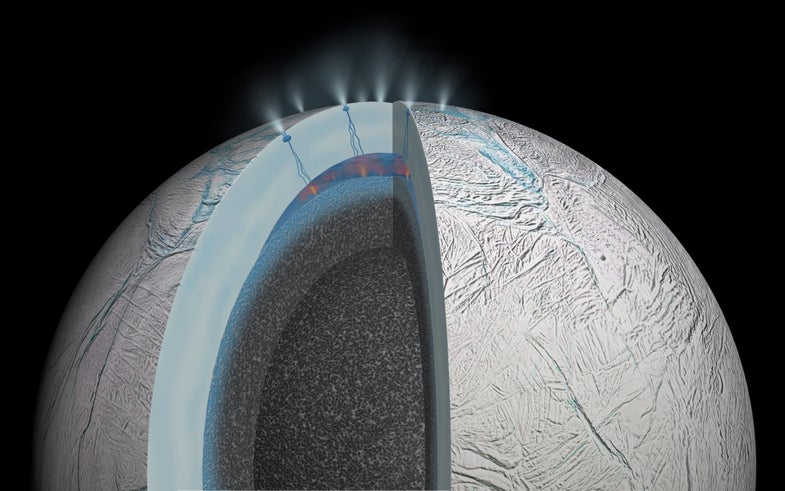 This artist's impression of the interior of Saturn's moon Enceladus shows that interactions between hot-water and rock occur at the floor of the subsurface ocean. NASA/JPL-Caltech
SHARE

Earth isn’t the only space rock in our solar system with an ocean. Astronomers theorize that a vast sea lies underneath the surface of Jupiter’s moon Europa, and many believe that Saturn’s chilly moon Enceladus is also home to a hidden ocean—the liquid of which makes its way to the surface via icy jets. But now, new research suggests that these plumes underneath Enceladus may not be so completely frigid after all. In fact, they may be byproducts of hydrothermal activity.

In a new paper, published in the journal Nature, researchers from University of Colorado in Boulder make the claim that a warm, deep ocean can be found under Enceladus’ surface. The reasoning for this? It all has to do with some space dust found by NASA’s Cassini probe in 2004. When flying by Saturn’s E-ring, the second outermost ring around the planet, Cassini picked up traces of nanometer-sized silicon-rich particles. 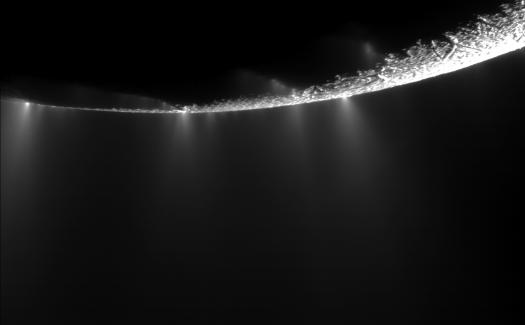 Many believe the source of the E-ring is Enceladus; the moon’s icy plumes eject materials into space, which then form the ring around Saturn. Most of the material making up the rings is ice, but these were silicon. And, according to lead researcher Hsiang-Wen Hsu, something was a little off about their size.

“To form these particles in space, there are two methods,” Hsu tells Popular Science. “You have fragmentation, where a big chunk of material smashes into smaller materials, and you get small particles and also medium-sized particles. But the ones picked up by Cassini only exist in a very narrow range of size, and that’s peculiar.”

Hsu and his team settled on the second explanation for the particles—that some forms of liquid-based reactions must have formed them. And given their small size, they could only have gotten into the E-ring under very specific conditions.

They must have been dissolved in water that was piping hot. Well, hot for this area of the solar system. In order for the silica particles to dissolve in Enceladus’s ocean, the researchers theorize that, deep within the moon, silicon-containing rocks are heated to 194 degrees Fahrenheit. That’s pretty toasty for a moon that’s more than 800 million miles from the Sun. The silica dissolves into water with a pH greater than 8.5 and travels rapidly (a matter of months or years) from the deep hot area of Enceladus’s ocean to the plumes on the surface, which then spew the silica into the E-ring.

How could Enceladus get so hot when it’s so far from the sun? “One of the most likely heating mechanisms is the tidal forces from Saturn,” explains Hsu. The push and pull of Saturn’s gravity may cause a great deal of friction on Enceladus, heating up its interior. But Hsu says this friction may not be enough to maintain the necessary temperature all the time. “Even tidal heating doesn’t explain the energy output we have observed by now. So one of the most popular scenarios is that Enceladus’ hydrothermal activity is not constant; it’s most likely episodic.”

Nevertheless, the research indicates that high-temperature reactions can still exist in small space rocks deep within our solar system. Plus, the discovery spells good news for the search for extraterrestrial life nearby. The conditions of these hydrothermal vents are similar to vents found at the bottom of the Atlantic Ocean, an area known as the Lost City. There, volcanic activity heats freezing water, allowing peculiar life forms to thrive. This analog makes Enceladus an exciting prospect for finding alien critters.