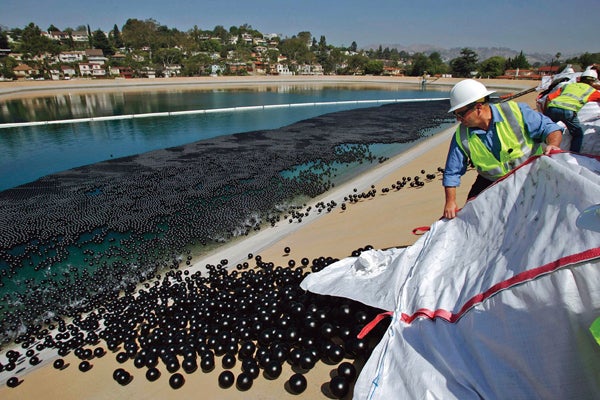 If you make a mess, just cover it up. That’s the theory behind the Department of Water and Power’s latest project in Los Angeles, which aims to prevent the formation of a carcinogen in two drinking-water sources, the Ivanhoe [pictured] and Elysian reservoirs.

The unwanted chemical, bromate, forms when sunlight, chlorine and the naturally occurring mineral bromide intermingle. The city considered solutions, like a tarp or metal cover, but they were all too costly, labor-intensive or ugly. Then the ball idea, courtesy of LADWP biologist Brian White, floated to the top. The layer of three million black polyethylene balls prevents sunlight from completing the deadly cocktail. If it seems a bit temporary, it is—officials plan to retire the balls in five years, when a replacement underground reservoir near Griffith Park is finished.