Spying on a Hostile Landscape

Satellite imagery of a volcanic desert reveals its greener past 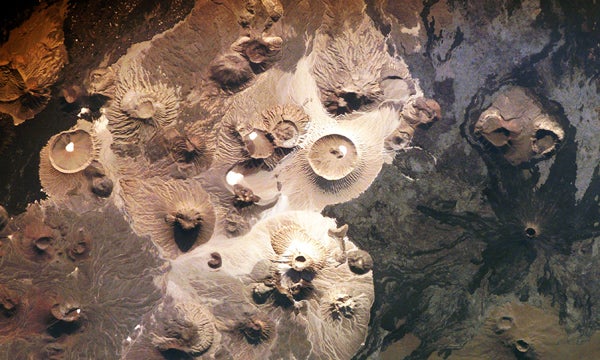 The beige-colored Jabal Bayda volcano crater, seen in the top center of this image, is almost a mile wide.

The sands of Harrat Khaybar, in the Saudi Arabian desert, weren’t always so parched. Evidence on the ground, such as fossilized hippo teeth, has led geologists to conclude that this dessicated lava field was once a lush grassland. But the case is even clearer from space, as seen in this photograph, taken from the International Space Station in March.

The crater in the center of the image is a “tuff cone,” a feature that forms when magma and water mingle—good evidence of a once-wetter climate. (A volcanic eruption, less than 5,000 years old, during the desert’s present arid state, caused the dark basaltic field to the right.) Learning how to study our planet from orbit will help us do the same above other planets. On August 11, for example, the Cassini orbiter’s cameras flew past Saturn’s moon Enceladus to photograph its water-ice geysers, evidence that liquid may be underneath.