Lean on Me (Or at Least a Monkey)

Researchers find that capuchin monkeys love to give 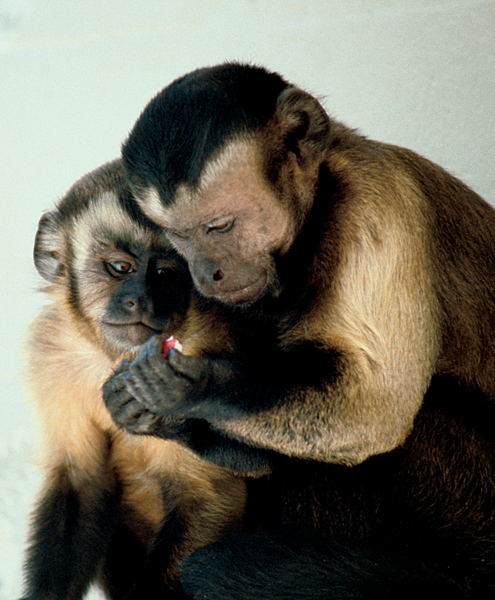 Primate intelligence gives me cognitive dissonance. It’s fascinating that monkeys can recognize numbers, construct tools and even follow to-do lists. But it also bruises my ego, just slightly, knowing that monkeys aren’t that different from my parents, friends or heroes. (Michael Phelps excluded. He’s the übermensch.)

We’ve always been separate from monkeys on one front, though. In countless documentaries about primates, after proving how intelligent monkeys are, the host always caveats it with a final statement: monkeys don’t like to share. Even when they split a banana with a fellow monkey, the reward centers of their brain don’t light up like ours. There you have it—we love altruism, so we’re better than them.

Well, not quite. Earlier this week, scientists from Emory University found that capuchin monkeys take delight in giving to others. They paired the animals with either a relative, non-related acquaintance, or complete stranger, and gave them a choice between two tokens. One of the tokens allowed the monkeys to enjoy an apple slice all to themselves, while the other rewarded both monkeys with the treat. When they were paired with a family member or acquaintance, most of the animals chose the latter. Researchers attributed this to their emphatic nature, and explained that the closer they were to the fellow monkey, the more likely they were to give. Just like us.