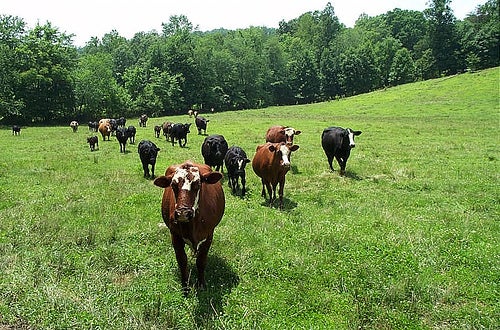 Lost in drive-by country? Look for a cow. It will probably be pointing north—or south.

After analyzing satellite photos of 8,000 cows in 308 different locations, German scientists have found that the milk-makers usually confront the world in a north-south direction. This preference isn’t an indication of the cows sunning themselves, researchers say—it shows that they can sense the Earth’s magnetic field.

The scientists were careful to correct for the animal’s whims: they only studied photos of cows that were resting on flat ground, and avoided ones that were near drinking or feeding areas. Couldn’t the cows just be guarding themselves from harsh winds? Not so, says lead researcher Sabine Begall. There was no correlation between gusty weather and the cow’s stance; in fact, if wind was the issue, cows would align themselves in different positions around the world, and not in a north-south direction.

Despite this finding, scientists will need to conduct more research before they settle on the magnetic theory for good. Magnetoreception is a laborious field to be in: after years of work, scientists haven’t pinpointed a chemical sensitive to the Earth’s magnetic field in birds, which are known for their magnetic personalities. They’ve come close in the lab, but haven’t found it in the bird’s bodies yet. Hopefully, they’ll have better luck with cows.