Here’s Where Astronomers Discovered We Are All Star Stuff

The Snow Telescope is one of those amazing artifacts, a phenomenal piece of history that is still working more than... 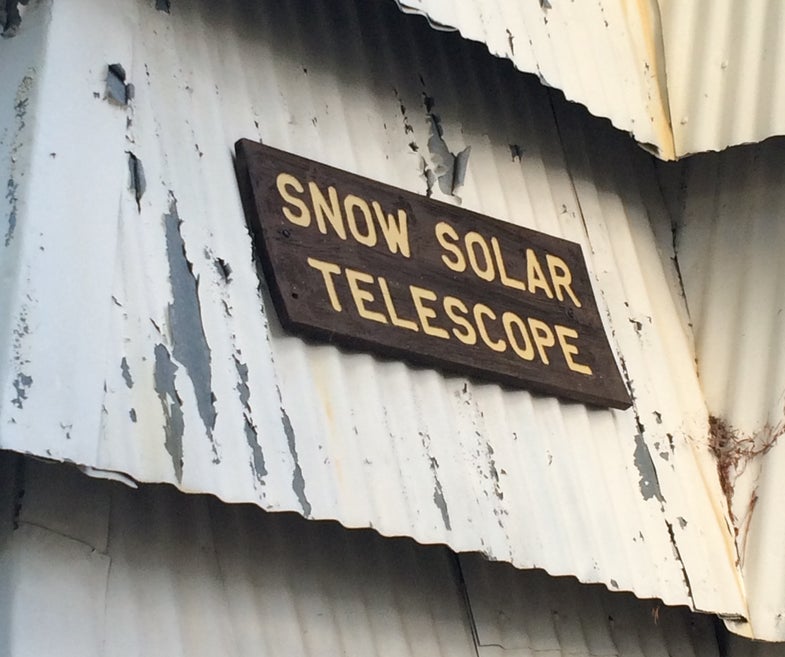 The Snow Telescope is one of those amazing artifacts, a phenomenal piece of history that is still working more than a hundred years after it was set up. This world’s first solar astrophysical observatory was the telescope that first showed astronomers what elements made up the Sun, and made it clear that we are also made of star stuff.

Named for the father of its benefactor, Helen Snow, the Snow Solar Telescope was built at the Yerkes Observatory in Williams Bay, Wisconsin, in the early 1900s. In 1904, it was moved to California and carried in pieces by mule to the top of Mount Wilson just north of Los Angeles where it was set up overlooking the city. And it’s not a tubular telescope with the whole assembly in a casing that points to the object of interest, each mirror and the instruments are designed to be operated separately so the whole telescope is actually housed in two buildings

The first two pieces of the puzzle are housed inside a sliding aluminum structure that offers shelter when the scope isn’t in use. The first mirror is a coelostat (pronounced like “see-lo-stat”) mirror. From its Latin roots of “caelum” meaning “sky” and “stat” from “statum” meaning standing still, coelostat loosely means that it’s a mirror that anchors the sky. Once you get it pointing at the Sun, a clock drive rotates the first mirror so it tracks the Sun across the sky so the light is never lost.

From that first mirror, the sunlight is reflected onto a second, 30-inch mirror at the far end of the telescope set up. This mirror sends the reflected sunlight 100 feet away to a third, slightly concave mirror at the opposite end of the setup. That tertiary mirror sends the beam of sunlight onto a 24-inch concave mirror with a 60-foot focal length that focuses the light into a 6.5 inch circle centered on the slit entrance of a spectrograph. By this point, the light has focused to the point that it is both hotter and brighter than normal.

That focused beam of sunlight passes through a slit into the actual spectrograph that sits halfway down a 30-foot deep pit. It splits the light into its composite colours, visible through a viewing window in the main telescope housing. And with a photographer’s loupe, it’s possible to see the absorption spectrum, which are sometimes called Fraunhofer lines, of the Sun.

Sunlight passing through a prism separates into the visible light spectrum, each colour representing a wavelength of light. But rather than a clean gradient from red to violet, there are a series of dark lines in the Sun’s spectrum. Those lines correspond to elements.

Every element has a unique atomic structure with protons and neutrons in the nucleus and electrons orbiting around that centre. Each atom’s electrons are also uniquely spaced in orbits around the nucleus, and can emit or absorb only certain energies or wavelengths of light. The black lines in the Sun’s light spectrum, then, corresponds to the elements that are absorbing the sunlight.

Looking down into the pit at the Sun’s absorption spectrum, astronomers first figured out what the sun is made of, and also learned that we are made of the same stuff as the Sun.

Thanks to Mike Simmons from Astronomers Without Borders for giving Robert Reeves, David Ho, and myself an excellent tour of Mount Wilson over Memorial Day weekend. There are some more images and videos from the day at Mount Wilson on my Instagram feed, astVintageSpace, if you’re curious!