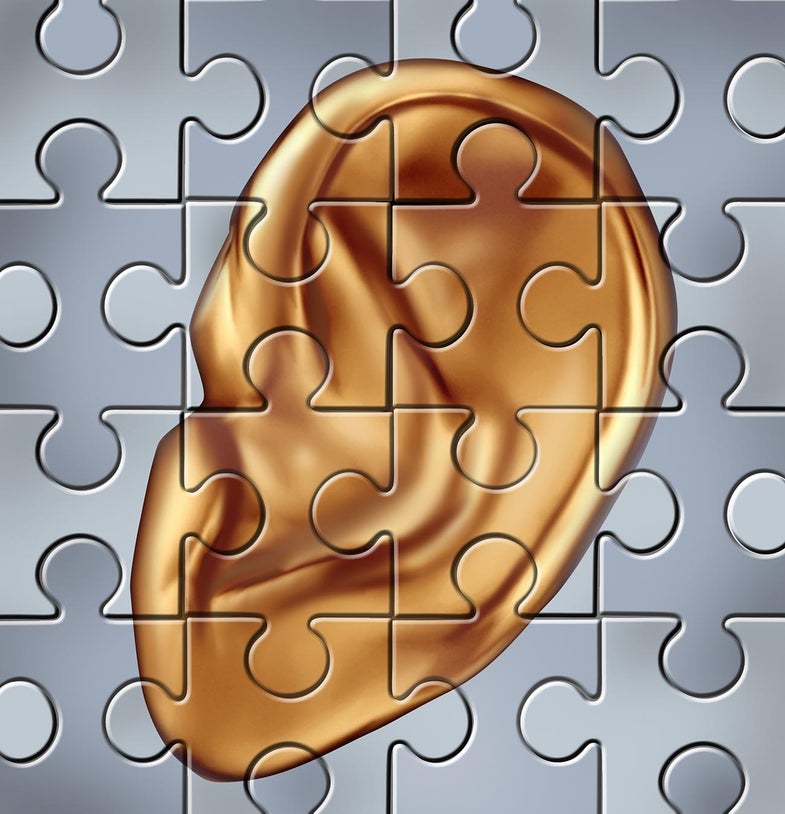 Why some people hear voices where none is present has long been a psychological puzzle. Depositphotos
SHARE

Serial killer David Berkowitz, also known as the “Son of Sam,” famously claimed that he heard voices in the form of a dog telling him to commit murder. But hearing voices isn’t necessarily a sign of psychosis. In fact, according to the authors of a recent study published in the journal Brain, enhanced attention-related nerual pathways might cause these illusory sounds. People hear them because their brains may be especially primed to pick up speech.

“It’s true that lots of people who hear voices have serious mental health issues,” Ben Alderson-Day, a psychological research at Durham University and lead author on the study told Popular Science. “But roughly 5 to 15 percent of the general population will have some experience of hearing unusual voices at some point in their lives. We think potentially up to one percent might have pretty frequent experiences and just don’t really tell anyone and get on with their everyday lives.”

It’s this one percent that catches psychologists’ attention. Because this group isn’t clinically psychotic and thus typically not on psychotropic medication, researchers can study their tendency to hear voices without the confounding factors of mental illness. They think these benign voices hearers could bring some explanation to why humans hear voices, and perhaps a more broad understanding of the brain.

“There’s an increasingly popular theory on how our brain makes sense of the world. Rather than just receiving sensory information passively, our brain is actively making predictions about the world and looking for meaningful patterns,” says Alderson-Day. The theory called predictive processing or predictive coding posits that a lot of our experience of the outside world is more about what we expect we happen rather than what is actually happening. It may explain, for example, why we tend to see shapes in clouds and Rorschach blots. We experience what we expect to experience, and we only change those predictions or expectations once we have enough evidence forcing our hand.

“And there’s an idea,” adds Alderson-Day, “that the people who hear voices might have brains that are a bit more primed to look for meaningful patterns in the environment around it particularly in unusual or ambiguous situations.”

To see if priming might play a role in hearing voices, Alderson-Day and his colleagues including researchers from University College London, and the University of Porto in Portugal, took two groups of people—those who claimed to hear voices but were otherwise mentally healthy and those who were also healthy but didn’t hear voices—and placed them into functional magnetic resonance imaging (fMRI) machines.

The researchers used something called the Launay-Slade Hallucination scale which measures both visual and auditory hallucinations to gauge how often the subjects were hearing voices. Because a lot of us have some experience hearing voices—if you’ve ever heard a voice (your mom perhaps) calling your name in an empty house you’ve experienced some level of auditory hallucination—only people who had recently and relatively frequently heard voices were included in this group.

The researchers exposed the two groups to two twenty minute runs of sine-wave speech (SWS). SWS takes a sense and distorts it by mimicking the frequency and amplitude of the actual sentence. SWS sounds a lot like R2D2 says Alderson-Day. “If those frequency and amplitude tracts are taken from the same original sentence,” he explains, “then it’s potentially intelligible, once you have training and once you expect to hear speech.”

They found that three quarters of the voice hearers could detect that there was speech, compared to just under half of the control participants. One participant, reported hearing speech from the first three or four runs. Intriguingly, both groups used a typical network of areas that we associate with speech and language, but the voice hearers also used additional areas of the brain.

“The voice hearers used two areas, the anterior cingulate and superior frontal gyrus, often associated with deploying our attention and monitoring for different kinds of important signals,” says Alderson-Day. “They’re not necessarily specific to language but they are about how we allocate our attention to the world around us. They lit up specifically to the sine-wave speech where there was hidden speech.”

The second run was more or less exactly like the first, except that both groups were trained to recognize the speech patterns. After this training, the difference between the two groups in terms of ability to recognize voices in the SWS disappeared. Once the non-hearers were told there was speech there they could hear it – but they had to be primed.

The study sample was pretty small, less than 20 people per group, so Anderson-Day cautions against making broad conclusions. Still he says, these preliminary results fall in line with the predictive processing theory. A separate study earlier this year in the journal Science by researchers at Yale University add additional context to Anderson-Day’s study.

That study exposed hearers, non-hearers, and schizophrenics to a stimulus known to trigger auditory hallucinations. The stimulus presents a person with a sometimes hard to hear tone and a light at the same time. Over time, upon each appearance of light, people have a tendency to say they hear a tone even though there isn’t one.

This tendency, to hear the tone when none was present, was especially likely to happen to those who hear voices – whether or not they had psychosis. Again, suggesting that voice hearers are primed to hear sounds in their environment. The biggest difference between those who heard voices and those who heard voices and had psychosis was their ability to accept that the tone wasn’t real. Non-psychotic voice hearers accepted that it was happening in their heads, which again leads credence to predictive processing theory—our expectations really might matter.

“Doing this kind of research particularly with non-clinical voice hearers is really key for showing how what we believe about the world, what we expect to hear can really shape our sensory experiences,” says Alderson-Day.

This naturally raises the question of how do people who hear voices, but aren’t psychotic, make sense of their experience? They use a range of techniques.

“Quite often the very first time they might not realize that other people can’t hear the voice or the voices but over time what they might do is develop an explanation for themselves that makes sense of it,” says Alderson-Day. “Which may be that they think it’s just something that their brain is producing like a kind of unconscious brain radio happening. I know at least one or two people who would call it that.” Others think of it in terms of the voice of a passing loved one, or in terms of a spiritual framework. Voice hearers are well represented among people who call themselves mediums or psychics.

Over time, if the predictive processing theory holds up, this might change the way we treat some mental illnesses. Right now, the common practice is to treat frequent psychotic episodes with medications. But Alderson-Day thinks that a better understanding of why people hear these voices could help mental health professionals treat them in a more targeted way, perhaps helping those individuals manage and reframe their experiences into ones that are less distressing. Regardless, Alderson-Day wants those who think they hear voices to always seek help from a medical or mental health professional.

There’s still so much we don’t know about the brain. But for now, this research reminds us that our experience of the world is just that—our unique experience, driven by the way our neurons fire. And it begs the question: What other ways could it bias us?