Mast cell activation syndrome mimics allergies in many ways. But could it lead to more chronic coronavirus cases? 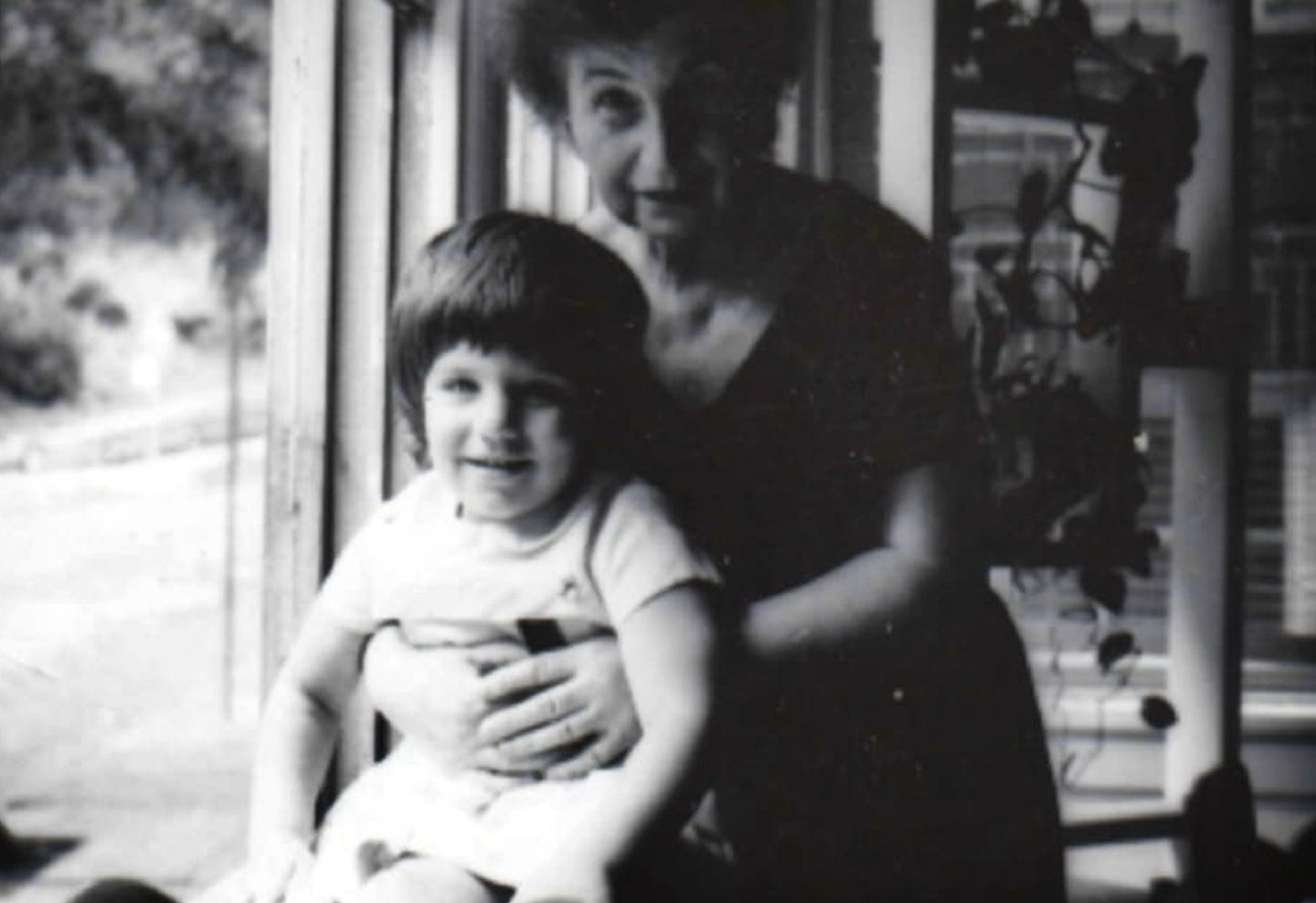 The author poses with her grandmother Esther Ehrenfeld in the early 1960s. Her family has a history of the immune disease known as mast cell activation syndrome. Courtesy of Temma Ehrenfeld/Undark
SHARE

Temma Ehrenfeld is a writer and ghostwriter in New York drawn to philosophy and psychiatry. Her most recent book is Morgan: The Wizard of Kew Gardens. This story was originally featured on Undark.

A year before the pandemic, I was diagnosed with a condition called mast cell activation syndrome (MCAS). A hallmark of the syndrome is hypersensitivities in more than one organ system: Food and other triggers can give me abdominal pain and severe diarrhea; my nose swells and I sneeze and wheeze. That sounds like allergies, but I’ve never tested positive on an allergy test.

Mast cells are among the immune system’s first line of defense. They are abundant in the parts of the body that have close contact with the outside world, including the skin, airways, and intestines. Mast cells gone wrong cause allergic symptoms, secreting histamine and giving us itchy eyes, hives, and rashes. Less well understood is their role in modulating the responses of other immune cells. Before the pandemic, researchers had suggested that mast cell dysfunction could explain severe cases of the flu—and highlighted the cells’ role in shutting down inflammation in a variety of situations. In my case, probably because of a genetic peculiarity, my mast cells overreact.

I was fairly stable on my medication, and then I became sick with Covid-19. Months after the virus had passed and I no longer had pneumonia, I was still fighting fatigue and breathlessness. My symptoms also flared up erratically. On some mornings, for example, the oatmeal I had relied on for years could cause me abdominal pain. “Once the mast cell response is turned up, it doesn’t wind down just because the infection is gone,” explained my doctor, Leo Galland, a New York internist who specializes in difficult cases.

MCAS often seems to first emerge after a virus. Could it explain any of the symptoms of the growing group of patients with long Covid? Congress has now dedicated more than a billion dollars towards research into why so many post-COVID patients—roughly a quarter, more often women—still feel ill long after their infection. In Facebook groups and elsewhere, people with plausible symptoms—for instance, severe lingering rashes and months of hives—have been trading information about remedies for the disease. Severe fatigue after exercise suggested myalgic encephalomyelitis/chronic fatigue syndrome, which some say is linked to MCAS. Others became lightheaded when they stood up, which might mean they had postural orthostatic tachycardia syndrome (POTS). Spend an hour searching online, and you’ll find papers saying POTS, too, may be a manifestation of MCAS.

But getting a workup for the syndrome can be a long ordeal. The full range of tests and treatments aren’t routinely covered by insurance, leaving some patients to pay thousands of dollars out of pocket. Before you get there, you need to find a sympathetic doctor: Researchers don’t agree on whether the illness is rare, or quite common.

I was lucky; Galland took me on in the 1980s. Long before the microbiome became a news item, he diagnosed me with intestinal dysbiosis—a disturbed gut. We don’t know why I got sick when I did, but when I showed up in Galland’s office, I was a young woman on an absurdly limited diet with a myriad of fluctuating symptoms. On a trip to Tucson, as just one example, my face and arms ballooned, and then shrank on the plane home. I had been exposed to a fungus in the desert. My grandmother commiserated; when her face swelled up, her doctors in Antwerp, in the 1930s, pulled out all of her teeth. She had no explanation.

Interestingly, disturbances in the gut may be linked to severe COVID-19, and correcting them a possible path to health for long COVID sufferers. Mast cells may have a unique role in communicating with gut bacteria. In midlife, I fit the profile for irritable bowel syndrome (IBS), the abdominal pain, often accompanied by diarrhea or constipation, that afflicts as much as 20 percent of the population, and often sets in after a virus. Desperate, in 2018, I had just completed a trial of hypnotherapy for IBS when my digestion took an embarrassing turn, with accidents in taxis, and I could no longer eat outside my home.

A new dietician, Tamara Duker Freuman, author of “The Bloated Belly Whisperer,” helped me identify the worst offenders: foods that are high in histamine, which can be found in everything from alcohol to avocados. After further testing, Galland put me on a regime: an arsenal of mast cell modulators and anti-histamines, including Pepcid, which also blocks histamine.

And I got better.

Mast cells were first named in 1878 by a German-Jewish Nobel Prize winner, Paul Ehrlich, a father of modern immunology who is most famous for discovering the cure for syphilis. At the turn of the century, scientists discovered anaphylaxis, the classic mast cell allergic reaction. The word comes from the Greek ana (against) and phylaxis (protection). The idea that an immune response could actually hurt us, rather than protect us, came as shock. Current research about the gut and immunity may change the paradigm again.

Five decades later, in 1949, scientists described a rare genetic disorder called mastocytosis, in which mast cells produce clones, building up in the skin, bones, and other organs. It wasn’t until the 1980s that researchers began to notice that mast cells could become hyper-responsive or over-activated without cloning.

On a separate track, since the 1990s, researchers have explored mast cell activity in IBS. (A clinical trial of Pepcid and Zyrtec for difficult IBS cases is currently underway at the University of Cincinnati.) Kyle Staller, director of the Gastrointestinal Motility Laboratory at Massachusetts General Hospital, now sometimes prescribes Pepcid if he sees other signs like hives, to patients who ask him to consider a histamine or MCAS issue. “I think anyone who’s been following the science closely has to start wondering, ‘How much could this be playing a role in that IBS patient who’s in front of us on a given day?’” he told me.

Competing proposals for diagnostic criteria emerged after 2010. Both proposals say that doctors should rule out other explanations for a person’s symptoms, and that symptoms should appear in a least two organ systems (in my case, it affects my gut, nose, and skin). Both proposals require lab tests—but they disagree on which tests are necessary, and on the ranges that would indicate someone has MCAS, as well as other details. Because lab results are elusive, Galland and some other doctors rely on a medical history instead.

The disagreement has led to two camps. In camp one, the condition is rare; in camp two, it occurs in up to 17 percent of the adult population. Specialists in camp one say patients are misled: “More and more patients are informed that they may have [mast cell activation syndrome] without completing a thorough medical evaluation,” an international group of 24 authors, led by Peter Valent, a hematologist and stem cell researcher at the Medical University of Vienna, wrote in April 2019 in the Journal of Allergy and Clinical Immunology.

A year later, a largely American group of 43 authors led by Lawrence Afrin, one of the earliest mast cell activation researchers, countered in the journal Diagnosis that patients are suffering and even dying from underdiagnosis. By then the pandemic had arrived, and Afrin suggested that some patients with long COVID might be experiencing MCAS.

Patients were seeing links as well. For example, the distinct POTS symptom of extreme lightheadedness, once often dismissed as a problem of anxious young women, emerged as one of the odder long Covid symptoms. POTS, which has been reported by patients who experienced Lyme and other infections, may involve histamine and several other chemicals released by mast cells. It is known to overlap with MCAS.

Last fall, when the Centers for Disease Control and Prevention reported on what it labeled multisystem inflammatory syndrome (MIS), the name rang bells: MCAS is clearly a multi-system inflammatory syndrome. Theoharis Theoharides, a professor of immunology at Tufts University who has studied mast cells for more than 40 years, wrote that MIS patients should be evaluated for MCAS.

Mariana Castells, director of the Mastocytosis Center at Brigham and Women’s Hospital in Boston, told me in an email that she’s seen no data showing that long COVID patients have the requisite diagnostic markers of MCAS.

Observers agree that the long COVID group probably includes people with different vulnerabilities. It would be marvelous indeed, if, one day, we found a single powerful concept to understand post-viral illness.

In the meantime, you might not need to fit either group’s criteria for MCAS, a difficult and chronic illness, to experience your mast cells’ betraying you sometimes. “Like many, many conditions, over time we [may] learn that there’s a spectrum of disease,” Staller said. “It’s not an all or nothing phenomenon.”

Even the group that sees MCAS as rare acknowledges the existence of a less severe form of mast cell activation that does not meet MCAS criteria. Theoharides has detailed several categories of the illness. He told me that he’d guess half of patients diagnosed with IBS might have mast cell activation of some kind.

If mast cell dysfunction is truly common, I trust the online buzz to help us find out. Crowdsourcing on patient forums is here to stay. And it’s good, after all, that sick people shared information, found support, and made long COVID a “thing” with ontological status.

Growing up, I had wondered if my grandmother’s multiple “allergies” were real. We didn’t laugh, but we didn’t exactly believe her. Then it happened to me.