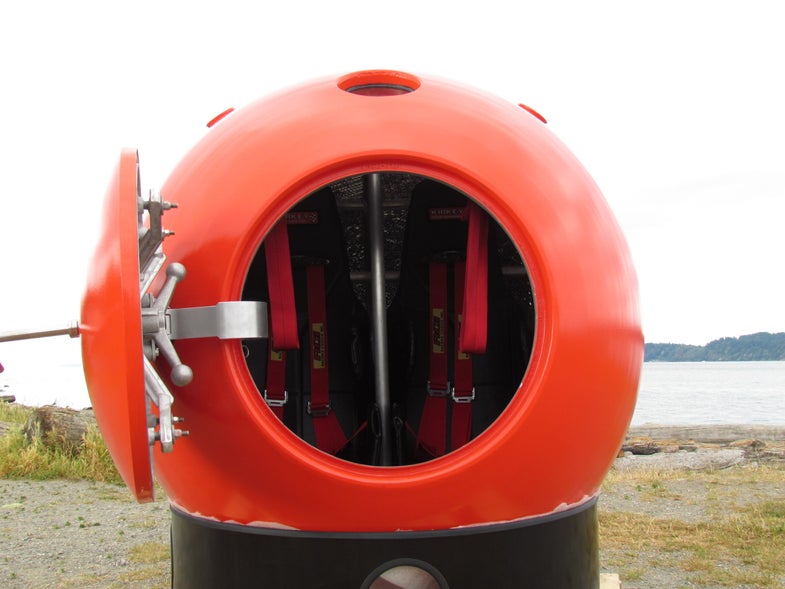 Alex Bellini is an explorer. He’s rowed a boat across the Atlantic Ocean, walked 1,200 miles across Alaska pulling a sled, and ran 2,300 miles across America. Next, he plans to camp out on an iceberg for a year–or as long as he can before it melts. Outside magazine reports that while there, Bellini will live inside an aluminum ball that was originally designed to protect against tsunamis.

The Survival Capsule is 10 feet in diameter. Its makers, which include former Boeing and NOAA employees, meant for it to serve as an escape pod for 10 people, housing food, water, and oxygen. The company offers smaller options for two people, but Bellini went for the 10-seater–though he’s redesigning it for life on the berg. He’ll remove nine of the seats, and trick it out with a wind generator, solar panels, Wi-Fi, a folding bed, and emergency radio beacon. In the event that the iceberg melts or flips over, the floating capsule should (hopefully) keep him safe until rescuers can come find him.

The Adrift 2015 website implies that the mission will begin this year, but Outside says next year.

By witnessing the lifecycle of an iceberg, Bellini hopes the stunt will connect people to the real plight of Earth’s melting glaciers and rising sea level due to climate change.