The Grouse: Assault on Batteries 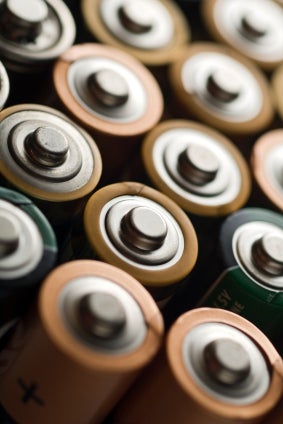 Perusing the deluge of overheated press releases from the CES conference a few weeks ago, one in particular, for Panasonic’s new line of EVOLTA batteries, got me thinking. And when I say “thinking,” I mean muttering curse words and shaking my fist. The release made a big deal about the fact that these new batteries last from 1.3 to 2 times as long as other alkaline batteries—which is to say, slightly less poisonous and wasteful, but not much. Whoopdee-flipping-doo.

Now I’m going to make a sweeping pronouncement, a real doozy. Are you ready? Here goes: Disposable batteries, no matter how efficient, should be considered a controlled substance and, as such, should be sold under the same restrictions as, say, prescription drugs or guns.

So, yes, in my ideal world, a four-year-old would have an easier time scoring a pack of smokes and a bottle of Jack than you or I would have buying a four-pack of AA Duracells. Now before any of you free-market zealots and libertarians out there get your freedom-panties in a bunch, hear me out.

To point out the very obvious, the demand for portable power has never been greater, and will only continue to grow; in the U.S. alone, we buy (and eventually throw out) more than three billion batteries a year, and some 350 million rechargeables. That’s a staggering volume, and it accounts for an incredibly lucrative multibillion-dollar business. Yet a single alkaline battery is basically a mini, do-it-yourself Superfund site kit. Each battery contains a smorgasbord of poisonous chemicals and heavy metals—mercury, cadmium, lead, lithium, etc.—a who’s-who of the worst things you could ever dump in a landfill. Inevitably, these compounds leach into the soil and groundwater, as we continue to throw out large quantities of batteries every day. It blows my mind how something so awful, and so easily remedied, is still so commonplace.

Now, until fuel cells or solar cells—or whatever the next revolution in portable power will be—become commonplace, we’re not going to change our polluting ways. Demand is increasing, and batteries are cheap, which means that both consumers and producers will need to be persuaded (read: forced) to be responsible. I advocate adopting the following draconian rules:

• Any business that sells batteries should be required to accept dead batteries and recycle them. At this point, that would include just about every business.

• To stimulate and fund recycling/reclamation efforts, battery manufacturers should be hit with a tax on all batteries that don’t meet standards of high efficiency and low eco-impact.

• All devices that can function using rechargeable batteries would have to come with a set. After all, one rechargeable is estimated to replace 300 disposables over its lifetime.

• Meaningful, hefty fines should be assessed for battery disposal—and let’s ban them from landfills outright. (Unbelievably, some municipalities and government agencies still recommend tossing alkaline batteries versus the expense of dealing with them.)

This plan is pretty commonsensical, and it’s probably low-cost once recycling and reclamation businesses scale up. It’s worth noting that the metals in certain types of batteries can be reclaimed and reused for new batteries, and their casings and labels recycled, while others at this point still need to be contained.

For now, a handful of programs for recycling batteries already exist. Car batteries and other lead-acid batteries are readily recycled wherever you buy them. Some chains, like Batteries Plus, accept most types of batteries; RBRC is a national program that deals with only rechargeable types. For other drop-off locations near you and other battery info, click here.

So what say the teeming hordes? Do we put this puppy to some gullible young member of Congress, or am I still missing some angles? And offhand, anyone feel like counting how many battery-operated devices they own? Don’t forget desktop computers, vehicles, smoke detectors, shavers, remote controls, garage-door openers, cellphones, and all those little button-style hearing-aid and camera batteries. I racked up 36 battery-powered devices in my tiny apartment, and just eight have built-in rechargeables.