An underwater robot attempts a record-breaking voyage across the Atlantic Ocean, fishing for signs of global warming along the way. See it in action in an exclusive video inside. 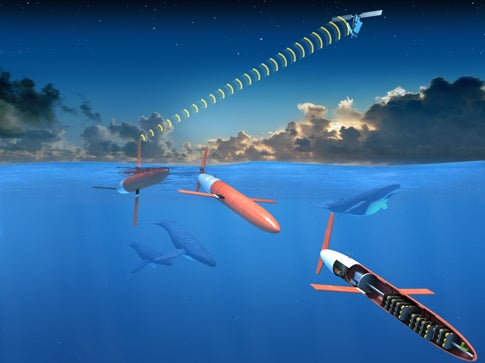 This month, a slow-swimming robot known as Spray will attempt to glide roughly 2,484 nautical miles across the Atlantic, from the southern tip of Greenland to the coast of Spain. An autonomous underwater vehicle, or AUV, Spray is a joint venture between the Woods Hole Oceanographic Institution in Massachusetts and the Scripps Institution of Oceanography in California. When deployed, it will act as an aquatic sentinel, gathering data on temperature, currents and salinity that will help scientists better understand the role of oceans in regulating the global climate. The main point of the Greenland-Spain run is to test its endurance-if successful, the robot will break its own record of 1,864 nautical miles for the longest distance ever traveled by an AUV. But the big goal, which researchers hope to meet by 2011, is to deploy hundreds of these gliders worldwide, giving scientists a constant telepresence in the ocean.

The 6.5-foot-long winged glider has no propellors. Instead it generates lift
as it dives up and down. A computer controls the angle of its dive by shifting one of three battery packs. (For a sharper dive, the pack shifts toward the nose.)

Scientists predetermine the dive´s depth, which can extend to 1,000 meters. When Spray reaches the low point, it pumps oil from a bladder in its watertight hull to another bladder in its water-filled tail. This pushes water out of the craft and makes it rise.

On the surface, Spray rolls to one side, and a GPS antenna embedded in the wingtip records its position. Then it rolls again, and an antenna in the other wingtip relays the new position and scientific data using a satellite phone system.

Scientists receive regular e-mail updates on Spray´s progress. If it´s off course, they can send new target points, which Spray will receive by antenna the next time it surfaces. During the early tests, scientists monitored the AUV for several hours a day. Now they just check their inboxes occasionally.

You’ll need the QuickTime plug-in to view this video. Download it here for free if you don’t already have it installed.