Hard to deliver the Cloud from down in the dirt 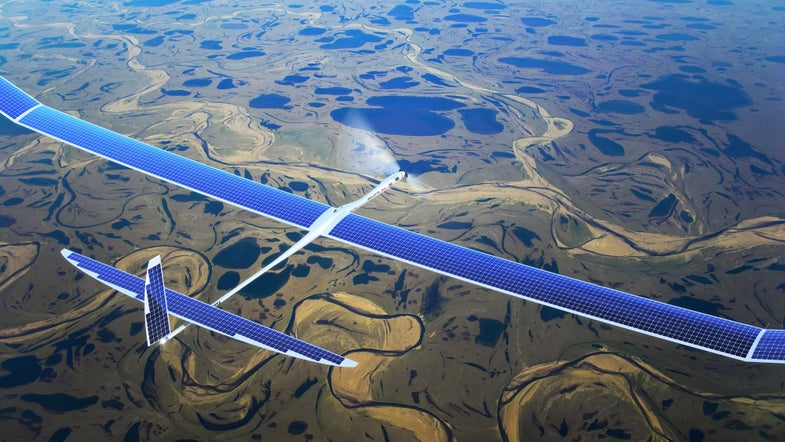 Google has been busy this week announcing tons of ambitious new products and services at its I/O developer conference, but not all of its experimental efforts are flying high. Earlier this month, on May Day, a Google-owned drone crashed somewhere in the sands east of Albuquerque.

The drone drew its power from the sun, and had been built by titans. Or, well, Titan Aerospace, a company that Google bought in April 2014 to create a high-flying, long-endurance drones that could deliver the internet to parts of the world where it didn’t exist. The crash happened shortly after takeoff, with Titan’s Solara 50 falling to the ground, though the news is just coming to light this week. No one was injured, but dreams of sky-relayed internet planes are at the least a little deferred.

The Solara 50 is designed to work best at high altitudes. There, with solar panels covering the majority of its 50-foot wingspan, the plane is intended to spend most of its flight time at 65,000 feet. At that altitude, it is mostly above other air traffic and above weather, free from the ambient risks inherent in skybound travel. Once in place, it’s supposed to stay airborne for up to five years, operating as a high-altitude satellite more than an active plane.

Apparently it’s the getting to such great heights that’s tricky. The National Transportation Safety Board, which is investigating the crash, hasn’t yet published a report on the incident, so we don’t know what went wrong this time. If Google plans to deliver the cloud from the clouds, it’ll need a plane that can reliably get there. Maybe they can ask Mark Zuckerberg for one; Facebook is developing and test-flying a similar Internet-beaming aircraft.