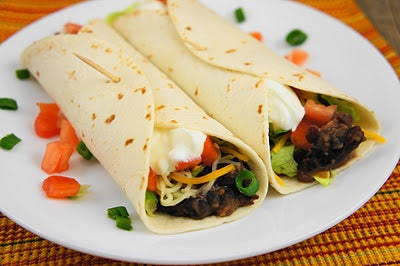 It may be a drone gimmick, but it’s a delicious one: Google is testing airborne Chipotle burritos in Blacksburg, Virginia.

The Roanoke Times reports that a drone was seen flying near Virginia Tech on Monday afternoon, hauling a large white parcel beneath it. It descended 10 feet, slowly dropped the precious cargo to the ground, and hovered away. Watch the graceful maneuver, here. Virginia Tech was selected as a designated drone test site by the FAA in 2013, according to The Roanoke Times. The package only traveled about a tenth of a mile, per Federal Aviation Administration recommendations on line-of-site operations of drones. These closed experiments are carried out by Project Wing, formerly a Google Alphabet company.

Questions remain: is this the start of a beautiful food delivery future? Will these things fly in snow and rain, when I’m laziest and would like a burrito airdropped to my doorstep? Why not just walk less than 200 yards to pick up the burrito? Unless it’s lying on the other side of a deep chasm, or a lava flow, perhaps. So close, yet so far.

More details will come to light as Google continues to experiment. For now, Hokies may rejoice, for the late night Sheetz run could soon be replaced by a drone dropping burritos directly onto their faces.