Why you really, really should not drive in Philadelphia at 3:00 p.m. the Saturday after the holiday 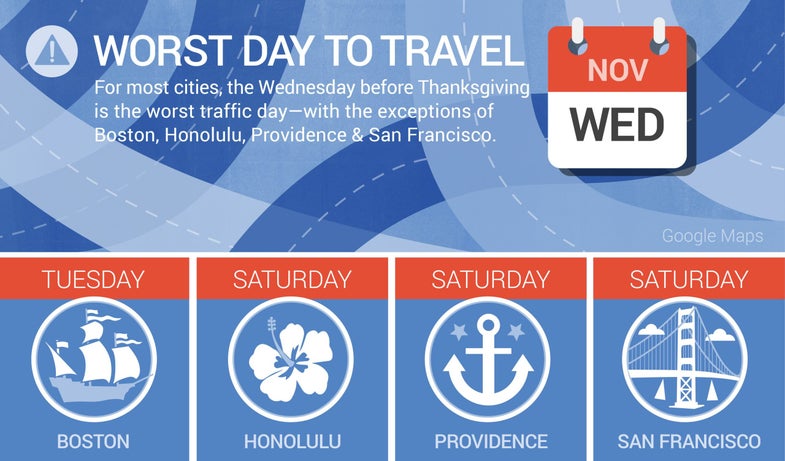 When we think of the Thanksgiving holiday, we all probably think of the T-word: traffic. (Wait, which one were you thinking of?) Anybody who’s had to drive home for vacation has probably spent some time trying to read the tea leaves and figure out when’s the best time to travel without getting stuck in miles-long traffic jams. Fortunately, the giant computing engine that is Google has crunched the numbers for us.

The folks from Mountain View pulled anonymous aggregate information from location-enabled Android phones, and used it to calculate just how many cars were out and about during the Thanksgiving weeks of 2012 and 2013 in 21 cities around the United States, including Boston, Chicago, Honolulu, Los Angeles, New York, San Francisco, and more.

The conclusion? If you’re looking to head over the river and through the woods to grandma’s house, try to avoid hitting the road on the Wednesday before turkey day; it’s the busiest day in most places. (Except, apparently, for my home town of Boston, where Tuesday is far worse, because we’re all constantly trying to beat the rush.) If you have to travel on Wednesday, Google says you’re best off leaving before 2 p.m. or after 7 p.m. to avoid the worst of the rush.

Saturday and Tuesday are also pretty busy days—and the former came in first in some places, like Honolulu and San Francisco—but it turns out that Black Friday traffic is surprisingly light. (Probably because everybody’s at the mall.) And when you’re looking to make a return trip, you’re best off driving on Sunday, as Saturday has up to 40 percent worse traffic.

If you prefer your Thanksgiving travel information in easy-to-digest—see what I did there?—graphical format, the company’s put together an infographic, embedded below, that breaks down your best travel bets for the holiday week.

Of course, if everybody were to follow Google’s travel advice, then we’ve got a whole new set of traffic problems. I guess we’ll find out the consequences of that next year.