Glowing galaxies, marshmallow-like ceramics, and other amazing images of the week 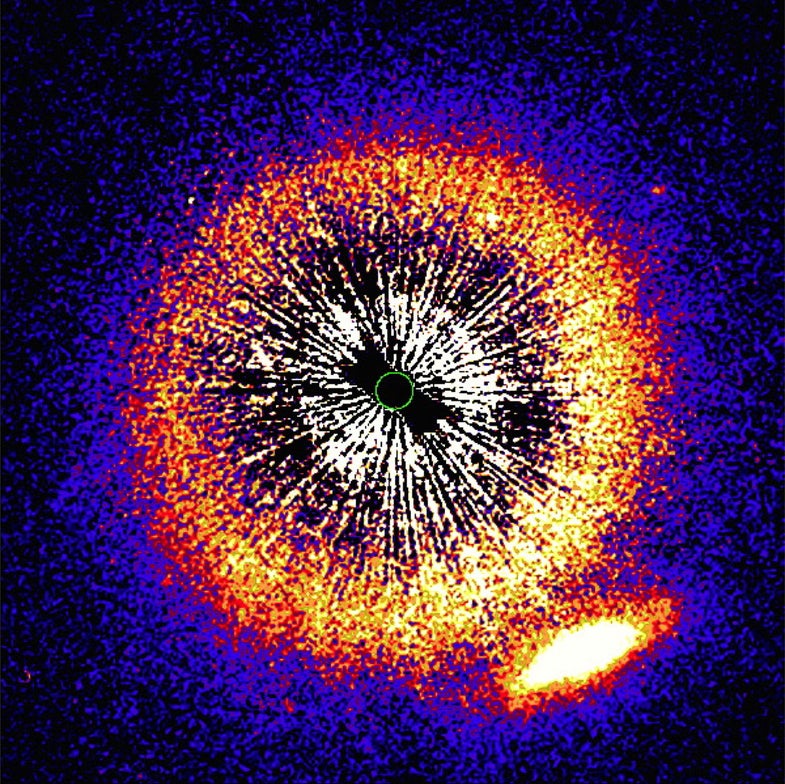 The glowing object at the center of this image from the Hubble Space Telescope is the star HD 107146, our neighbor here in the Milky Way. But the real scene stealer is the distant “Vermin Galaxy” to the lower right. So-dubbed for its annoying habit of turning up where it isn’t invited, the “Vermin Galaxy” can actually teach us a lot about HD 107146, a star that might be similar to our very own Sun. The distant galaxy is currently in transit, or passing behind the closer star. By observing it through the orange ring of debris surrounding HD 107146, scientists can figure out what exactly makes up the debris.

Ceramics class might have taught you that all pottery is hard and brittle, but this new type of ceramic is breaking the mold. Researchers at China’s Tsinghua University have developed a new method called “solution blow-spinning” that allows you to spin ceramic like cotton candy, except with ceramic nanofibers instead of sugar. Flexible and heat-resistant, the new material could be useful for insulation or water filtration.

Turns out that magnifying lenses aren’t just useful for seeing tiny things. Researchers at Smith College are using gravitational lensing—the magnification of far away light when viewed through the gravitational fields of closer galaxies—to take close-up photos of distant galaxies with the help of the Hubble Space Telescope. These galaxies are currently undergoing high rates of star formation, so being able to see them in such detail could enlighten us on the origins of our own Milky Way.

Homo sapiens just got a little older—by about 100,000 years. A fossilized human jaw bone found at Jebel Irhoud in Morocco was originally thought to be 40,000 years old, but new evidence shows that it can be dated back 315,000 years. Up until this discovery, the oldest human fossils were 200,000 years old, so the new discovery suggests that human history in Africa might extend further back than previously thought. We may have missed a few birthdays, but we still look look pretty good for our age.

Dreams do come true — at least for these 12 talented individuals. This group has just been announced as NASA’s newest class of astronauts, and it includes doctors, pilots, and even a former commercial fisherman. After two years of intensive training, they’ll have the opportunity to soar to new heights as potential crew members on an upcoming mission, such as the International Space Station or NASA’s Orion.