Researchers Use Explosives To Break Up Biofilms And Reduce Antibiotic Resistance 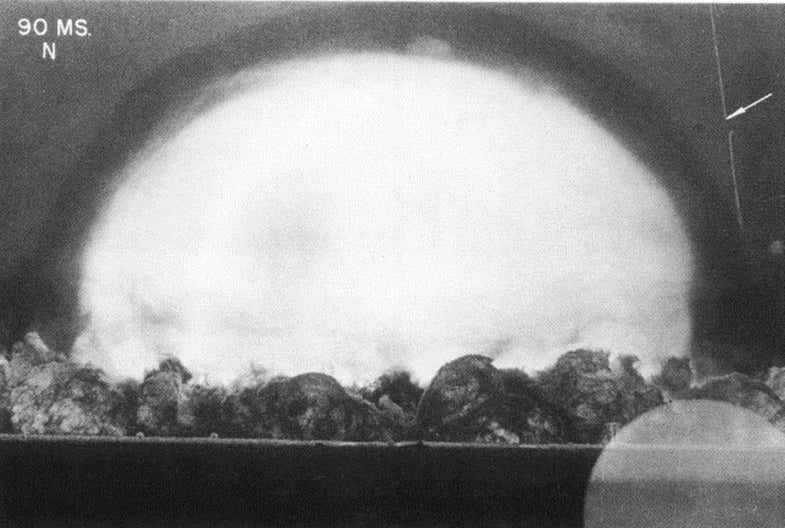 When bacteria get together, they have a tendency to form communities. Back in the 1970s, this formation was given a name, biofilms. While at one time they may have been considered to be a rather innocuous part of microbiology, over the years they have proven to be far more important, particularly in health. Their formation can drastically worsen an infection and leave a patient in a life or death situation.

Apart from the implications for health, biofilms have also been blamed for the rise in antibiotic resistance. The thick nature of the community inadvertently allows many members to experience lower concentrations of the drug allowing them the time to evolve and eventually tolerate the attack. Biofilm-mediated resistance as it is now known has become so troublesome that antibiotic discovery pipelines must now take this phenomenon into consideration.

Controlling a biofilm is not easy. Once it has formed, it can resist a number of physical and chemical treatments making these options less than successful. The situation worsens when the community happens to be inside a person such as cystic fibrosis or a wound infection. Because of the biologically sensitive nature of the human, only a few possible routes for therapy can be used. Not surprisingly, most of them are simply not effective at breaking the buildup.

The hunt for options to deal with biofilms in infections has led to some interesting propositions. The use of bacteriophages has been put forth. Silver nanoparticles are known to have antimicrobial properties and also been suggested as biofilm busters. Hydrogels, which remove excess water from wounds, have also shown some promise. Yet all of these ideas require significant amounts of testing and clinical approval before they can be used. This means more time is needed before a valid option is developed.

But thanks to an article released last week, there may be a better option. An international group of researchers have suggested a traditional mechanism of chemical combat may be repurposed to help those in need of a biofilm break. The process is a relatively simple mix although most might not consider it in the realms of public health. They want to mix antibiotics with explosives.

An explosion is a chemical reaction in which an ignition leads to a growth reaction in terms of energy. As that energy grows, it is released in a uniform manner. Because of the incredible speed at which an explosive undergoes this process, the energy is released in the form of a shock wave.

In a large-scale explosion, shock waves can be in the quite detrimental to biological entities. Yet, when the amount of explosive is reduced such that the energy released is in the range of a few Joules, better known as micro-shock waves, the effect on human tissue is minimal. They are, however, rather effective on individual bacteria and biofilms. This opens up an array of applications for micro-shock waves ranging from food safety to wood preservation.

For the authors of this study, micro-shock waves presented the perfect companion to antibiotics in order to deal with biofilm infections. To prove their hypothesis, the team tested a combination of shock waves and drugs using several different models. They first aimed to remove biofilms in cell culture and on catheters in vitro. Then they wanted to go in vivo to attempt to clear both respiratory and skin infections in mice.

To accomplish this, the group used infinitesimal amounts of the explosive octahydro-1,3,5,7-tetranitro-1,3,5,7-tetrazocine (aka HMX). They were able to generate 9 Joules of energy with each micro-blast, enough to cause a disturbance in the biofilm but not enough to cause tissue damage in the mice. Four conditions were tested: no treatment, antibiotic treatment, shock wave therapy, and finally, a combination of the two. If the theory was correct, only the last option would be effective.

When the tests were complete, the team’s hopes were fulfilled. The control, antibiotic only, and shock therapy alone had little to no effect on the bacterial infection. But, when the two treatments were combined, the bacterial load was significantly reduced for both cell culture and mice.

For the authors, the results reveal the usefulness of shock waves to aid in combatting infections. The outcomes also offer a path forward to deal with antibiotic resistance. Since the technique can quickly be upscaled to the human body (just add a little more HMX), the team believes this double treatment is ready for use in human clinical trials.

In light of the concerns regarding biofilms and antibiotic resistance, we need to think beyond novel drug development. By harnessing the nature of physics, the authors have found a viable option that could be rapidly tested for approval. If the results of this study continue into the human realm, we may soon end up with a viable means to get the upper hand in the battle against biofilms. Not only would that be an immense shock to the bacteria, it may also provide a welcome shock of relief to patients and public health officials worldwide.