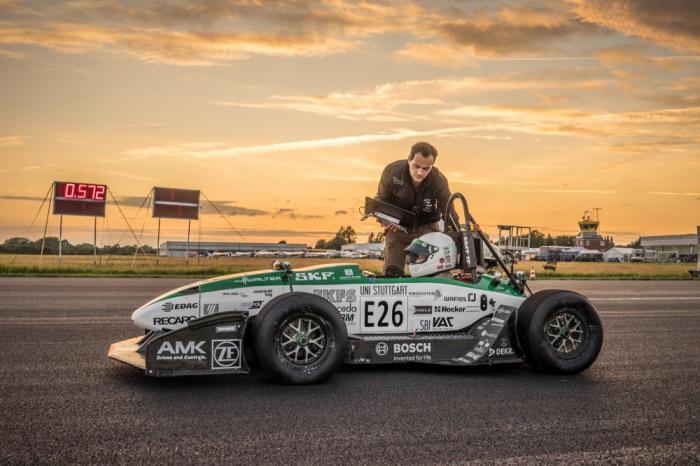 Here in the States we talk about 0-60-mph runs when it comes to discussing the specs and performance of your average performance machine. Across the pond, our enthusiast friends who smartly embrace the metric system, measure a nearly similar jaunt as a car travels from 0 to 100 kilometers per hour. Translated to America-speak, that works out to a 0-62-mph blast.

Well, there’s a brand new record in this space, and it’s blisteringly quick.

Hailing from the University of Stuttgart, in Germany, the Green Team Formula students have created an electric vehicle that can run from 0 to 62 milers per hour in just 1.779 seconds. That’s seemingly impossibly quick, especially when you compare that figure against all manner of hyperexotic street cars and even top-tier race cars. The Porsche 918 Spyder can make the trip in just 2.5 seconds, depending on who is doing the driving and the timing. An Ariel Atom 500—you know, the one with the 3.0-liter V-8—can apparently rip off a 2.3-second run. A modern F1 car can usually make the 0-60-mph run in just over two seconds.

How was the Green Team able to produce a vehicle that bests all of those other vehicles? By running a fully-electric vehicle equipped with all-wheel-drive. The torque from the four electric motors is sent instantly to all four wheels. Couple that with the extremely low curb weight of nearly 353 pounds, and you have a recipe for tremendous acceleration. The vehicle we’re dealing with has a fantastic power-to-weight ratio, besting that of the aforementioned Porsche as well as the mighty Bugatti Veyron.

Really, there are few vehicles that accelerate more quickly than this. Top Fuel Dragsters will win the race to 60 miles per hour or 100 kilometers per hour, but those are the fastest accelerating things outside of vehicles capable of leaving this planet. They can make the 0-60-mph dash in around half a second but can’t really be driven like a normal car.

For the German students and their amazing machine, we tip our caps and salute you. This is one heck of an achievement, and we hope others seek new ways to push the record even further. We do know of an electric Datsun nicknamed the White Zombie out there that could run to 60 in 1.8 seconds.

Is there more out there? We hope to find out.