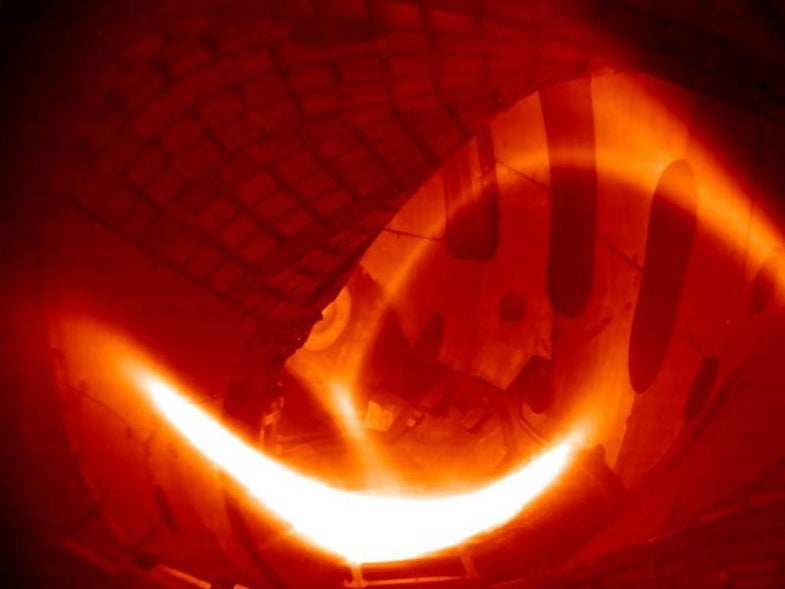 Yesterday, one of the grandest experimental fusion reactors in the world flared to life, converting hydrogen into a plasma for less than a second. The honor of pressing the button went to a PhD in Quantum Chemistry (who also happens to be the Chancellor of Germany), Angela Merkel.

Why such a high-profile ribbon-cutting? Fusion power is a kind of nuclear power source, the same thing that happens on a much larger scale in the hearts of stars. Theoretically, if you could get light atoms to fuse into heavier atoms, the energy produced by the reaction (which happens at immense temperatures and pressures) would be a clean source of energy that could continue almost indefinitely, without the radiation byproducts of nuclear fission (the method currently employed at nuclear power plants).

The German experiment, called Wendelstein 7-X, received funding or components from Germany, Poland, and the United States. This is the first run with hydrogen, though it did some initial work creating helium plasma last year. Though the hydrogen plasma was short-lived, it was an exciting moment for researchers.

“With a temperature of 80 million degrees [Celsius] and a lifetime of a quarter of a second, the device’s first hydrogen plasma has completely lived up to our expectations”, Hans-Stephan Bosch, head of operations for Wendelstein 7-X said. The Wendelstein 7-X is not designed to produce energy. Instead, the experiment is focused solely on producing and maintaining a levitating ball of super-heated plasma, which is a key step towards fusion energy.

The Germans aren’t the only ones working on fusion, though. In France, the largest fusion reactor ever made, called ITER, is under construction. Private companies are in on the race too, with Lockheed Martin also working on a fusion reactor design.

While they are both meant to achieve a similar goal, there are differences among the designs used by the various groups. One of the more popular models is the tokamak, a Russian design used by ITER. It uses a doughnut-shaped machine to generate a magnetic field to contain the hot plasma. The Wendelstein 7-X on the other hand is a stellarator also a doughnut shape, but with the distinct advantage of theoretically being able to run indefinitely, instead of in pulses like the tokamaks. If the Wendelstein 7-X succeeds in producing plasma for long amounts of time, (they hope to get up to 30 minutes by 2025 if not earlier) then it might show that the stellarator design could be used in future fusion power plants.