How We’ll Get People To Mars In One Piece 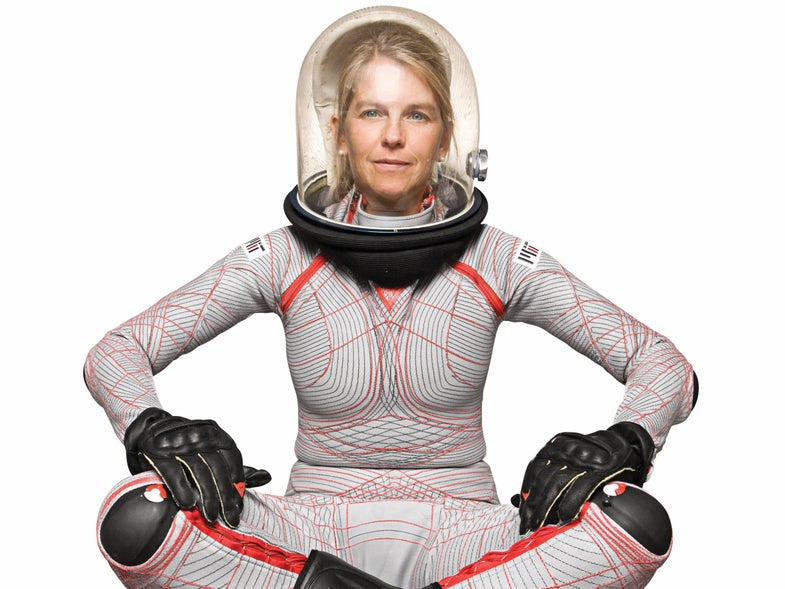 Aerospace engineer Dava Newman has devoted her career to figuring out how we might live in space—suspending subjects from the rafters of her MIT lab to study reduced gravity and designing a flexible, self-mending space suit. As NASA’s new deputy director, she is now tasked with the planning and policy that will make greater human space exploration possible. That means leading the agency’s 18,000 employees and 40,000 contractors toward a successful crewed mission to Mars by the 2030s.

In her own words

Right now, we have five rovers and orbiters exploring Mars. A human mission is a different ballgame. You have to think about stuff like access to water, psychological impact, radiation, and what happens to your muscles and bones in three-eighths of Earth’s gravity. Those are the kinds of things we’re trying to figure out on the International Space Station. The twins experiment, for example, will compare the vital signs of the Kelly brothers—one in space and one on Earth—to see physiological and genetic differences.

After the ISS, the next phase will be to go beyond low-Earth orbit into cislunar space, the region between Earth and the moon. That will be a proving ground in the 2020s. Then, we’ll move into the neighborhood of Mars. Before we go to the Red Planet itself, we might want to go to one of its two moons. There’s plenty to learn from landing there since the physics is different from here.

Because of orbital mechanics and the way Mars and Earth revolve around the sun, the two planets are nearest to one another for about 30 days, once every 26 months. That means the four- to six-member crew could stay on Mars a month, or they could stay until the next window, two years later. I think it makes sense to spend a lot of time on the surface because the trip is so long—seven months and 350 million miles, give or take.

We have 15 different tech road maps to get there. Because of the budget cycle, we can’t afford big breakthroughs in all of them, so we’re focusing on eight, including propulsion, entry, descent and landing, and life-support systems. And, of course, there’s education. For students today, Apollo is ancient history, yet they all want a selfie with the astronauts. The magic of NASA is that it still has a cool factor for young people. That’s important because they’re going to be the ones who actually set foot on Mars.”

This article was originally published in the September 2015 issue of Popular Science, under the title “Dava Newman on Getting People to Mars in One Piece.”