Apple iPhone 14 comparison: How to pick your next upgrade

How to pick the right iOS smartphone for you. 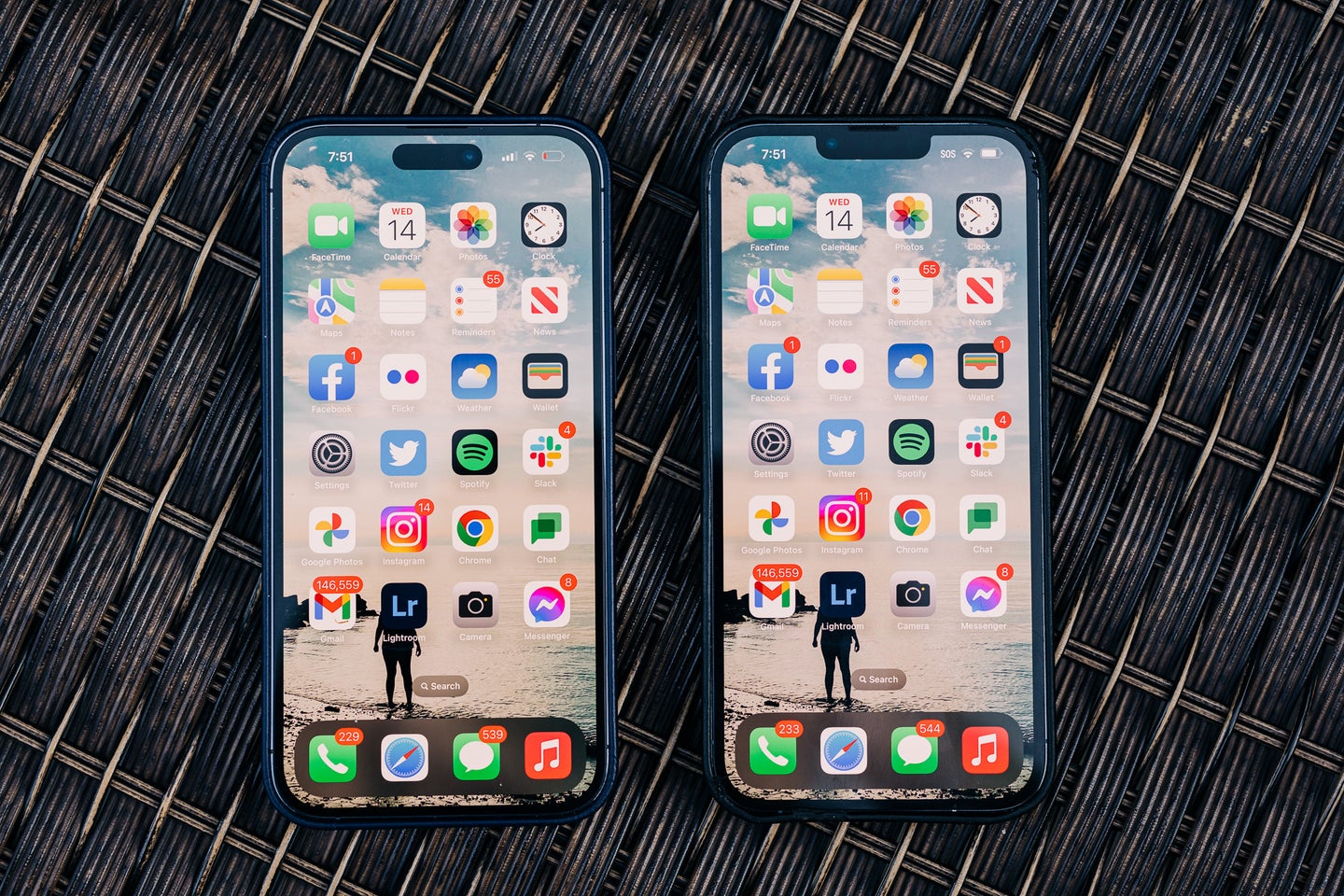 Both phones next to each other show the difference in max brightness. Stan Horaczek
SHARE

Apple announced the newest set of iPhones, the iPhone 14 series, during its Sept. 7 “Far Out” announcement event. There are four phones this year, with two different sizes and two sets of specs. The standard 6.1-inch iPhone 14 and larger 6.7-inch iPhone Plus feature very modest upgrades this year. Most of the flashiest improvements, including an always-on display and the much-discussed “Dynamic Island” notifications UX, are exclusive to the more powerful and more expensive iPhone 14 Pro and iPhone 14 Pro Max. If you’re planning to upgrade this year, we’ll walk you through the benefits of each model so you can figure out which iPhone 14 works for you.

Before we highlight the differences among Apple’s iPhone 14 models, there are a few new and exciting changes you’ll see across the whole line. All the new phones run iOS 16, the newest version of Apple’s mobile operating system, out of the box. If you’re new to the iPhone, or haven’t installed iOS 16 yet, it introduces a bunch of interesting new features, including the ability to customize your lock screen, edit sent messages, and enable haptic feedback for the keyboard. Apple’s new devices also support Emergency SOS calls, coming in November, which will enable satellite calls and texts to emergency services, even when cell service or Wi-Fi isn’t available.

The entire iPhone 14 series, along with the Apple Watch Series 8 and Apple Watch Ultra, features new motion sensors that can detect when you’ve been in a car accident. The feature, called Crash Detection, works by measuring sudden speed shifts, cabin pressure changes, abrupt changes in direction, and extreme sound levels. If you get in an accident, your phone will automatically call 911 and notify emergency contacts after a few seconds.

There are other similarities across the iPhone 14 series, like the switch from physical SIM cards to eSIM in the US, and the exact screen sizes (6.1-inch and 6.7-inch). Additionally, they all have upgraded to Bluetooth 5.3 for the most stable connection to the excellent new AirPods Pro (2nd generation). Here’s how each device breaks down, from the cheapest to the most expensive:

Starting at $799, the iPhone 14 is the most affordable model in Apple’s new smartphone lineup and the best option for more people. It features the A15 chipset, similar to one in last year’s iPhone 13 Pro, with a slightly improved thermal design that will keep the phone cool when playing games or watching videos. In addition to those core iPhone 14 upgrades, Emergency SOS via satellite, and Crash Detection, it offers an upgraded dual-camera system with a new “action mode” that makes your video footage look less shaky.

Compared to the new iPhone 14 Pro and Pro Max, the iPhone 14 misses out on a few key features, including the more advanced 120Hz always-on display and upgraded triple-camera setup, which now features a 48MP sensor. These features are worth paying the extra money if you want the best camera experience and best display technology in an iPhone.

The iPhone 14 Plus is simply a larger version of the standard iPhone 14. It features a fairly massive 6.7-inch screen, but most of the internal components and performance should be identical. The Plus has one meaningful upgrade under the hood: battery life. Apple estimates the 14 Plus should get up to 26 hours of battery life on a single charge, versus 20 hours on a standard iPhone 14.

Given how little has changed year-to-year, we only recommend the iPhone 14 and 14 Plus for people who need a new iPhone, either because their current phone is damaged or too old to update, and do not wish to pay a premium for the Pro or Pro Max. The extra battery life adds some appeal to iPhone 14 Plus, but the decision between the two ultimately comes down to what screen size you prefer.

The iPhone 14 Pro and Pro Max are the most powerful iPhones to date. Starting at $999, the iPhone 14 Pro features an upgraded triple-camera system and an always-on display, which can show you information at-a-glance without waking your device. It features Apple’s new A16 Bionic chipset, with a 6-core CPU that features two high-performance cores and four high-efficiency cores, a triple-camera system with a 48MP main sensor, and a 120Hz refresh rate whether gaming or scrolling apps, emails, and feeds.

Unlike other iPhones with Face ID—including the standard iPhone 14 and 14 Plus—the iPhone 14 Pro and Pro Max feature a pill-shaped cutout, rather than a notch. Following in the footsteps of “hole-punch” selfie-cameras in recent Android phones, the notch replacement gives the Pro and Pro Max a sharp, distinctive look.

The cutout also serves as the centerpiece for the phone’s new notification and quick-access feature, the “Dynamic Island,” which creates a reactive window around the cutout to show alerts, notifications, and ongoing background activities like Maps, Music, and more. It will also support “Live Activities,” a type of interactive push notification when it launches later this year.

If you’re going to get an iPhone this year, we recommend going for the 14 Pro or 14 Pro Max. With a new chipset, the always-on display with the Dynamic Island, and some interesting innovations around the cameras, it is a far more worthy upgrade than the standard iPhone 14 and 14 Plus.

What about an older iPhone?

While everyone is currently raving and reviewing the iPhone 14 lineup, there’s nothing stopping you from going back to less recent revisions of the iPhone, like last year’s iPhone 13 and even the iPhone 12. The last few years of iPhones all have a lot in common: They all run iOS 16, feature excellent camera systems, and offer a similarly high-end, polished experience. Meanwhile, they cost significantly less than they did at launch because they aren’t the newest option.

For the absolute best bargain, though, consider the 2022 iPhone SE. The budget-friendly iPhone, refreshed earlier this year, features a much older design: It has a home button with Touch ID, just one 12MP rear camera, and a relatively small 4.7-inch LCD screen. Despite the stripped-down, almost retro feature-set, it sports an A15 Bionic chipset, so apps will run smoothly. For under $500, the iPhone SE is an excellent phone and one of our favorites at that price point.

At this point, you really can’t go wrong with any of the older models mentioned above. Even the iPhone 12, which came out in 2020, will likely receive new updates from Apple for another 3-5 years. We generally recommend opting for newer phones and PCs to maximize their lifespans, but given the price differential between last year and this year, with only a small performance jump from the iPhone 13 to iPhone 14, there’s never been a better year to buy an older iPhone.

What size iPhone 14 should you get?

The iPhone 14 series comes in two sizes: 6.1 inches and 6.7 inches. Though it sounds small, you’ll see the difference in size when you look at them side-by-side and feel it in your hand when you pick them up. If you’d prefer something smaller, you can go with an iPhone SE, though you’ll miss out on a lot of features.

The easiest way to figure out which size is right for you is to go to your nearest Apple Store or big-box electronics retailer and pick them up. Remember that, in addition to larger displays, the larger iPhone 14 Plus and iPhone 14 Pro Max models have larger batteries and give you more space to browse the web, play games, and watch videos. However, you may prefer the small fit (and lower prices) of the iPhone 14 and iPhone 14 Pro. Go with what works best for you.

Is the always-on display worth it?

As we mentioned, one of the headlining features of the iPhone 14 Pro and iPhone 4 Pro Max is an always-on display. With this feature, the screen reduces brightness and drops the phone’s refresh rate to 1Hz when it isn’t in use, so you can check your lock screen to see the time, temperature, and check other widgets quickly without touching the phone to wake it.

An always-on display can be helpful and encourage users to use their phone less because they can glance at their phone to see information rather than unlock it and open an app. However, the feature can impact your phone’s battery life ever so slightly and some reviews, like ours, have noted that Apple’s implementation feels clunky compared to Android counterparts.

One more thing to keep in mind: Having an always-on display on your phone may not be especially helpful If you already own an Apple Watch, since you’re already getting that information on your wrist.

How good is the iPhone 14 Pro’s camera?

If photography is your No. 1 concern when picking up a new phone, you should consider the iPhone 14 Pro and iPhone 14 Pro Max. This year’s flagship iPhones feature more significant changes than usual, resulting in higher-quality images and videos. One of the most notable changes is a 48MP main camera, the highest ever in an iPhone. This new sensor takes advantage of a process called “pixel binning,” which allows the software to create more detailed 12MP images by combining groups of four pixels into a single virtual pixel. You can also take full 48MP images if you shoot in RAW, giving you more flexibility to manipulate the images in your editing software of choice.

So, which iPhone 14 should you buy?

Compared to other previous models, we’d say it’s a very good time to buy a Pro-tier iPhone, and a good year to skip the standard iPhone. With a modified version of last year’s chips and only a couple of notable hardware features, the standard iPhone 14 and iPhone 14 Plus don’t necessarily warrant an upgrade unless you really need a new phone. Meanwhile, the iPhone 14 Pro and Pro Max offer some really exciting changes, big and small, such as an always-on display, Dynamic Island, and an upgraded set of cameras

There’s definitely an argument to go for the iPhone 14 over an older model. Features like Emergency SOS via satellite and Crash Detection offer great infrastructure changes that are great to have, even if you never want to use them. That said, we wouldn’t blame anyone for buying a used iPhone 13 or 13 Pro to save a little money. Ultimately, it’s about finding the right balance of hardware, software features, and price that works best for your needs.