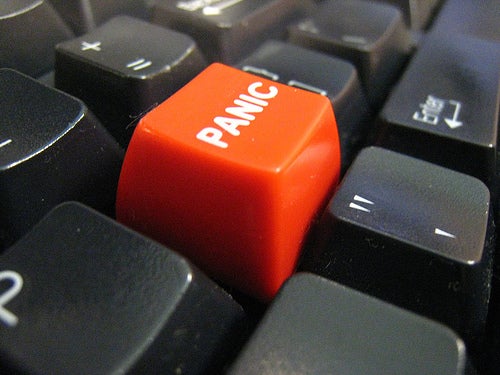 Being a tech consumer is a treacherous endeavor these days. Installing software, upgrading a piece of hardware or even just plugging in a new peripheral is a pursuit wrought with danger. That’s because, as a man named Murphy has us conditioned to believe, something will inevitably go wrong. And when things do go haywire—when Part A won’t play nice with Part B—you’re left trying to figure out just what’s to blame. Is it your operating system? Is it the USB port on your computer? Is it your thingamajig’s firmware?

In that situation, who ya’ gonna call?

Introducing a new piece of hardware or software into your tech ecosystem is a lot like drilling haphazardly into the walls of your house. Hey, maybe things will be OK, or maybe you’ll perforate a gas line. Maybe you’ll even flood your basement—you can never really be sure. But, home repair woes are a lot less treacherous than tech problems. Drill through an electrical wire in your house and (if you’re not dead from the shock) it should be fairly obvious why the lights aren’t working. Knock out a gas line and that deceptively pleasant smell will warn you that it’s time to hoof it outdoors.

It would be nice if tech were as helpful. On any given day, nearly all of us depend on at least a hundred different moving technological parts that have been sold to us and are serviced by a hundred different companies (if they’re serviced at all). How can things possibly not go awry? It wasn’t too long ago that any “technology” problems you encountered were easily solved by the guy down the street. TV out? Bring it to the TV guy. Vacuum stopped sucking? There’s a fellow for that, too. In fact, he’s probably the same one you bought it from. Now, a problem with your TV could be the television or the cable box, the TiVo or the overpriced cables you shelled out for. Good luck.

For me, the problem is with my printer’s wireless capabilities. I bought a Lexmark printer not too long ago, and the thing has stopped talking to my Mac. Well, that’s not true—it’s more like the printer and laptop are in a bad relationship and only communicate when they’re both “in the mood.” Is it my Mac that’s acting up or is it the Lexmark? Is it my wireless home network that’s at fault? I like to consider myself to be somewhat technologically savvy, but I’m flush out of answers on this one. I’ve called Lexmark a few times, and each time the problem gets fixed until I restart my computer. The thought of another 30-plus–minute tech support call that’s been routed to Timbuktu makes me queasy—where’s the guy down the street for problems like this?

Then I remember Geek Squad. Never in a million years would I have considered calling a service like this before, but in the interest of finding a happy ending for this article, I gave them a call.

My happy ending still eludes me.

The long and short of it is this: I called, exchanged pleasant banter with the operator and was dispatched a geek, who I was promised would show up on an agreed upon day within a four-hour window. For this, I was charged $169.99 plus taxes, which totaled $184.23. What would I fetch for such a hefty sum? I was told the geek wouldn’t leave my home until the problem was fixed and that his work would be good for 30 days.

The geek arrived right in the middle of the four-hour slot dressed in the requisite white shirt and black tie. He was very nice and professional, which helped to assuage my fears of getting stuck with one of those Geek Squad perverts you might have read about in the news. Of course, with the geek present, my laptop and printer were in an amorous mood and playing nice with one another. Though I’m sure he’d heard it from a thousand poor saps before me, I said it anyway: “I swear this wasn’t working before you got here.” Though unable to duplicate my troubles on my main computer, I fortunately have an older Mac laptop that was exhibiting the same problem. The geek went to work, and I excused myself to catch up on some DVR.

An hour later, the geek emerged to tell me that the problem had been fixed, albeit via a workaround that’s not really worth explaining here. Point being: The problem was only half fixed. Before charging me full price, however, the geek offered up his professional opinion on my choice of printer, which boiled down to, “You should have gotten an HP.” An hour and 185 bucks later, that’s what I’m left with. And as a nice little prologue to the story, my computer now crashes every time I try to print. That’s new.

What I’m getting at here is the fact that even the so-called solutions in place to diagnose and fix tech problems are flawed. Not only that, they’re expensive. I paid $129.99 for this stupid printer, and nearly $200 to be told I should have bought a different one. And therein lies the problem with Geek Squad and services like it—technology has never been more disposable than it is today. When your TV used to bust, the guy down the street could do some minor surgery and have you back up and running for a reasonable price. Nowadays we throw the TV out and buy a new one. Not that we’re spoiled—manufacturers have made it more difficult and expensive to repair their gadgets, and far easier to buy the latest and greatest version. iPod anyone?

So, here’s my solution: Befriend the office IT guy. I don’t care if you have to dust off your Dungeons & Dragons skills or wear a multi-cell phone utility belt to work. A friend in the IT department is a friend indeed. The next time something electronic of yours puts up a fight, invite him over for dinner. Let it slip during casual conversation that you might possibly maybe could be having just a teeny tiny bit of tech trouble and if it’s not too much trouble maybe he could pretty please take a look.

Do you have any other choice?

_Been Ping-Ponged back and forth between customer support lines? Had a tech problem that’s never been fixed? Got a better solution than mine? Share!