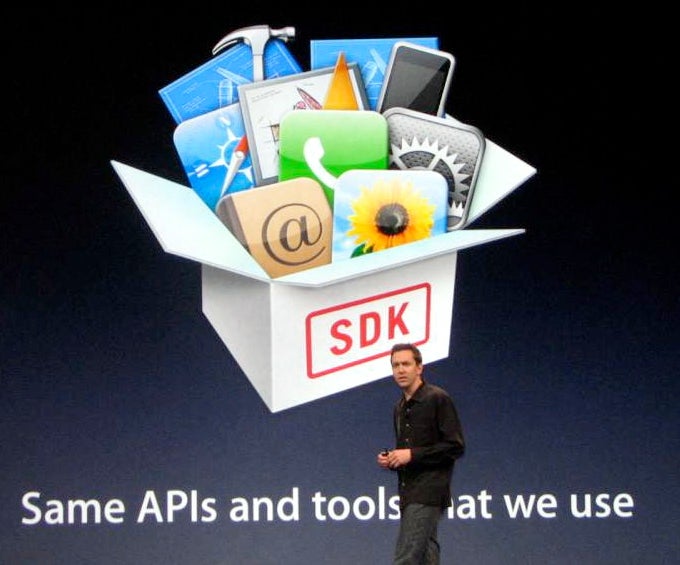 Fitting for a programmers conference, this Apple keynote focused on software—and the announcement of a new iPhone felt almost like an afterthought. Nearly an hour of the keynote was dedicated to a parade of developers who had built iPhone programs using the software developers kit (SDK). But is it really as easy to write iPhone apps as Apple says it is?

Developers in the crowd answered with a resounding “Yes.”

In fact, it seems to be downright easy for anyone with coding experience. For instance, Mark Terry, a British developer who works in the insurance industry by day, created one of the hit applications shown during the keynote. His program, Band, turns the iPhone into a pocket recording studio. Using the iPhone’s multitouch screen, people can tap virtual piano keys or strum graphical guitar strings, for instance, then mix the tracks into audio recordings.

Brian Doig, a software developer with Walt Disney said the SDK is “A bag full of awesome . . . you can reach in and find everything you need.” Other mobile devices have similar programs, he said, but nothing as easy to use as this. The trick, according to Mike Myer, another Walt Disney developer, is that Apple lets developers debug their apps right on the phone.

Alexander Stickelberger, a developer for the company Nous, came from Vienna for the event. Although the SDK did not become available to developers in Europe until two weeks ago, he said his company was able to have a working version of the app by today.

The program, a mobile guide for museum visitors, was created so quickly, he said, because the SDK is based on the same developer tools that are used for the Mac OS X operating system. Nous was able to begin creating the program with their OS X software before the new iPhone kit even arrived.

Dung-Kyun Kim, a developer with Daum—a Korean internet company that’s the country’s number one e-mail provider (think Yahoo!), said he also really liked Apple’s SDK. In fact, the only real sour spot of the day was that, despite rumors to the contrary, Korea was not one of the 70 countries listed for the second-gen iPhone’s worldwide rollout. “We are very disappointed,” he said. “We want to make apps. But Korea wasn’t on the list. Now we have to wait even longer.”