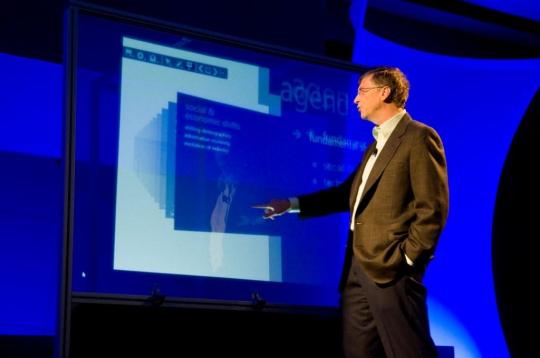 Speaking at yesterday’s CEO Summit in Redmond, Washington, Bill Gates – that guy from Microsoft – demonstrated the TouchWall, a four foot by six foot touch-screen computer prototype. TouchWall uses infrared and laser technology to register your manual input, and turn it into action. One writer described it as a giant version of Microsoft’s Surface technology oriented vertically.

This isn’t the first such large touch-screen interface – Panasonic revealed a similar system at CES (plus, it’s also reminiscent of the interface featured in Minority Report). What’s interesting is how Gates described its potential impact. He said that it could turn every surface in your home or office, every wall, into a computer. As he put it in his speech: “Think about the whiteboard in your office becoming intelligent.”