Sony/Pioneer Planning to Tune Your TV Via the Web? 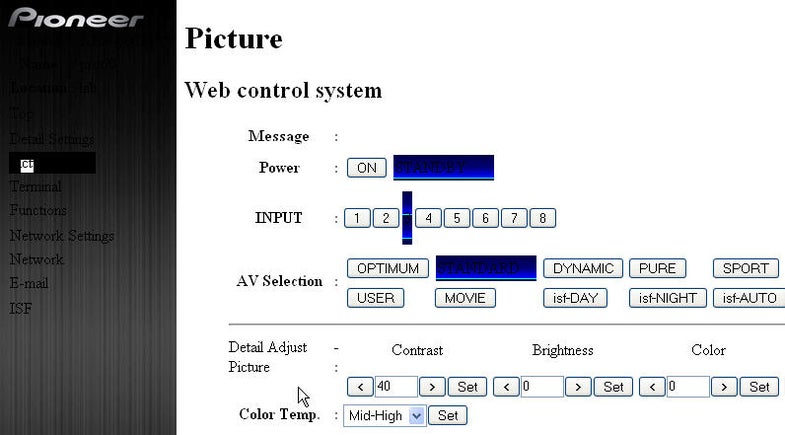 Hmmm…What’s this? Looks like a Web-based remote control for your TV. We happened upon this randomly today, and it raises lots of interesting questions. The URL sonyathome.com brings up a Web page that sure looks like it belongs to Pioneer Electronics — what with the big “Pioneer” badge in the corner and an email function that sends a message from “elite@pioneer.com” (“Elite” is Pioneer’s premium brand of A/V gear).

Is Pioneer developing software for Sony? Is Pioneer merging with Sony? Seems unlikely, since Pioneer just formally announced a joint venture to get plasma panels from Panasonic, and already have a deal to get LCDs from Sharp. But then again, Sony also gets LCDs from Sharp. Hmmm.

Well, whatever courtship dance the Japanese megacorps are doing, this looks like a neat feature. It’s definitely a hint at future TVs from Pioneer or Sony (or someone) having an Internet connection that allows you to adjust their picture and configuration settings over the Web. Even in your own house, I can imagine using a PC will be easier than the interminable button presses on today’s unintuitive TV remote controls. But is this interface even meant for customers? A Web connection will theoretically let you control the set from anywhere. So presumably, tech support can log in to fix your set if you screw it up while trying to make the picture “better.” (Sharp recently introduced a remote tech support feature on its TVs.)

The interface also has an “ISF” screen for a trained and certified calibrator (aka “TV Whisperer”) to make pro-level adjustments. That really smacks of Pioneer, which has long built in functions to make it easier for pros to make high-end adjustments. After all, customers who call themselves “Elite” are more likely than most to hire techs who charge upwards of $300 per visit.

So where’s this all going? We’ll keep digging. Stay tuned.

Update: As the janoskyfamily below points out in the comments, the site appears to have been removed. The quick work here to take down the site may very likely suggest some truth behind the speculation.