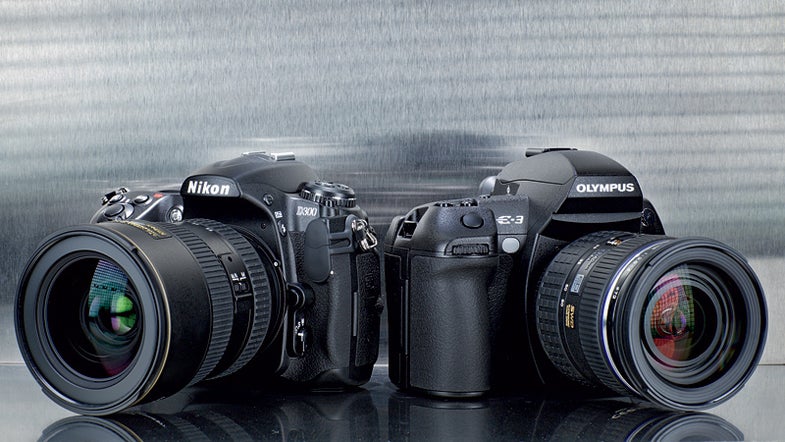 Digital SLRs shoot as fast as machine guns, but all those pictures are useless if they come out blurry. Autofocus often fails in low light and with quick-moving subjects such as athletes or toddlers. We pitted two cameras that promise faster, more accurate autofocus technologies against both each other and top competitors from Canon. 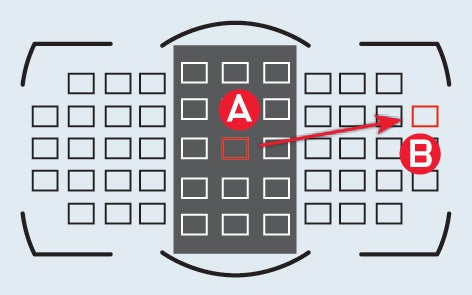 $1,800; nikonusa.com
Packing 51 autofocus points (the most for an SLR), the D300 is designed to hold focus on a moving subject by tracking its color (say, a basketball player’s blue jersey). For example, users can lock the central focus point [A] on the player. If he darts to the edge of the frame, the camera passes the focusing off to another point [B] in a split second. 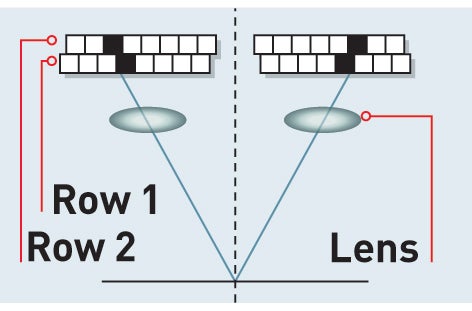 $1,700; olympusamerica.com
Each of the E-3’s 11 focus points has an extra row of pixels, shifted over from the first row by half a pixel (like layers in a brick wall). This lets the E-3 gather twice as much information, which it averages to create a more precise reading. By combining that system with new lens motors, Olympus claims to have the world’s fastest autofocus.

To gauge autofocus in dim settings, we shot various targets at several light levels. To test with motion, we photographed a person walking toward us, first straight-on and then zigzagging. To measure speed, we rapidly alternated between focusing on two subjects at different distances. And to compare Nikon and Olympus with a range of competitors, we also tested Canon’s 40D ($1,300) and 1Ds Mark III ($8,000).

The Nikon D300 matched the high-end Canon 1Ds Mark III and slightly outperformed the other cameras in low light, making it a good choice for shooting indoors or at twilight. The focus tracking worked as promised. The D300 didn’t feel fast in our speed tests, but when we tallied the number of shots that actually came out sharp, it scored a bit better than the Canon 40D and far ahead of the Olympus E-3. The 1Ds Mark III trounced all competitors.