How We Tested Autofocus 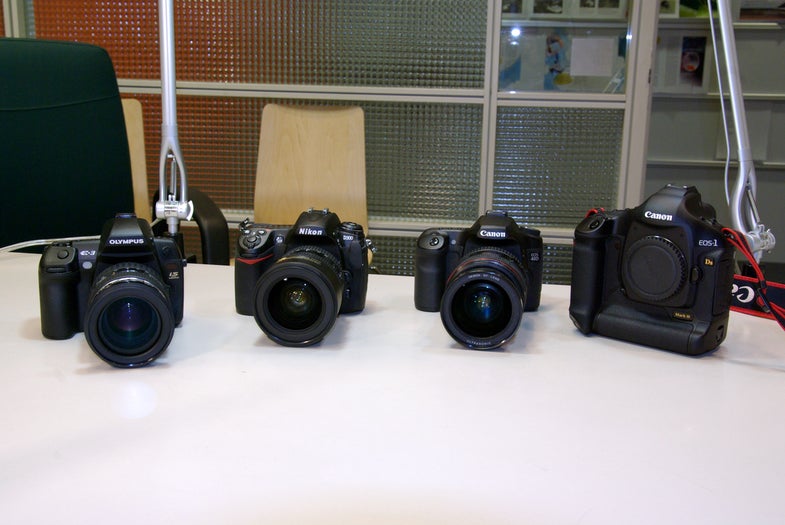 There is no single measure of autofocus ability, so we did two main tests to judge the cameras’ chops. The first was to see how well each camera performed in difficult situations: low light and subjects with very little detail. In the second, we picked subjects that are easy to get in focus and simply measured how fast each camera could do it.

This was our setup:

SLRs, of course, take interchangeable lenses. So we chose models that best matched across all models. The choice was easy for Olympus, since at the time the company had only one lens–a 12-60-millimeter F2.8-4.0 SWD–with the new “supersonic wave drive” motor that they say yields the fastest performance. We asked Nikon to match that, and they chose their 17-55mm f/2.8G IF-ED. With a smaller sensor, the Olympus has more zoom, so the 25mm setting on its lens was equal to 35mm on the Nikon lens. Our two Canons took turns using the same EF 24-70mm f/2.8L USM zoom, set to 32 millimeters on the 40D (which has a sensor similar to the Nikon) and to 50mm on the 1Ds Mark III, which has a giant “full-frame” sensor equal to the size of an old-fashioned film frame.

We opened the lenses wide (f/4 aperture) for two reasons. It let in plenty of light, and it provided a shallow depth of field—which means that things only appeared sharp if they were right in focus (or very close). An f/4 setting is good, for example, to take portraits where the person’s face comes out crisp but the background is blurred. Light sensitivity was set to a very high ISO 1600.

These were the tests:

This was a torture test. We attempted to focus at four different light levels—from very dim to bright. And we focused on three different kinds of targets: a chair with a very smooth fabric cushion; a scarf with a complex, contrasty pattern; and a sheet of white paper with dark black text.

This test should have been the opportunity for Olympus to shine. With its double-layered image sensors, it is supposed to be very sensitive and accurate. But it was the weakest—unable to focus on most shots.

A good SLR can focus in less than a second. That’s too fast for us to time with a stopwatch. So instead we forced the cameras to keep autofocusing for 30 seconds and counted how many times they succeeded in doing it.

Our setup was simple: We used two targets at different distances, and kept alternating between the two. What was our target? Black text on white. It provides plenty of contrast, making the autofocus process as easy as possible so we could mainly measure speed. The first target was about 6 feet away, the second about three feet. So the lens didn’t have to move much. For shutter speed, we went with a fast 1/500th of a second, so we wouldn’t get any blurring from quickly swinging the cameras from one target to the next. (For that, we had to flood the room with light to get a good exposure.)

We performed the tests using both the single, central autofocus point and multiple points. Most cameras did best with the center AF point. As Olympus had suggested, the E-3 performed best with “Dynamic Single AF Target Mode,” which turns on the central 5 AF points and uses the first one that gets a lock.

We clicked away when a timekeeper said “go” and ceased when she said “stop.” Then we tallied up how many shots the camera had taken. (We repeated the process three times and took the highest score.) Simple.

Just one problem: When we opened the pictures in Photoshop, A lot of them were blurry. The cameras were set to only take a photo after they had locked focus. But often, they took a shortcut. Since we were testing the speed at which a camera can focus, not sorta focus, we counted only the pictures of text that were clearly legible. That’s how the Nikon, which seemed poky, wound up scoring so well. It may take its time focusing. But when locks focus, it means it.

_
We also tested the ability of the Nikon to follow a moving target—one of our editors zigzagging around the room. The Nikon has the unique ability to do this by using its white-balance sensor. It notes the color of the object you are focusing on, and if it sees that color move around, it passes off the focusing duty from the original point to another point. As Nikon had predicted, this didn’t work so well when our editor wore a white T-shirt, but it followed her like a homing missile when she wore red.

_
The Nikon D300 lived up to its billing. Not only could it track a moving object with ease, it was also very accurate at focusing. Its performance came very close to Canon’s 1Ds Mark III—a camera that costs over four times as much.

The Olympus was a mixed bag. The company says that it’s the fastest-focusing camera in the world. Perhaps it is in certain test conditions, but not in ours. On the bright side, Olympus SLRs are not known for being fast focusers at all, and the E-3 goes a good way towards narrowing the performance gap with competing cameras.