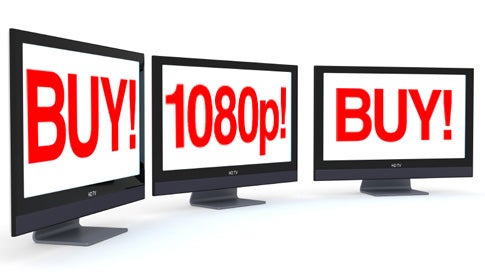 The readers have spoken—and I shall heed your call! Based on the flurry of responses from a Grouse column last month (in which I bemoaned the snake oil sales tactics of the overpriced cable market), there’s clearly a hunger out there for clarity when it comes to parsing the jargon-filled nonsense that’s used to market consumer electronics. Hype is always to be expected when it comes to sales, but unfortunately sometimes conventional wisdom gets swept up in the hubbub and eventually we find ourselves believing in techie urban legends. Great for sellers, not so much for consumers. So taking my own advice, I’m following the Gadgetry Golden Rule and passing on a five choice bits of somewhat counter-intuitive wisdom I’ve had need for and which may inform your next purchase. Pay it forward—hit the comments section with your own, and spread the word.

If you believe this, you’ve probably been upsold. Sorry! Undoubtedly the reigning champ of BS sales-speak, 1080p is an unnecessary upgrade for a lot of consumers for several reasons. Chief among them is that sitting at normal viewing distances, unless you’re rocking a flatscreen that is bigger than 47-inches (diagonal), you can’t humanly tell the difference between 1080p and 720p. Honest. And of course precisely nothing is broadcast in 1080p or will be for the foreseeable future (due to bandwidth constraints), so you can’t really watch much that’s actually 1080p that hasn’t been scaled anyway, other than HD DVD/Blu-Ray discs or video games. If you’re getting a relatively smallish screen, concentrate on other factors instead.

Actually, it turns out not all megapixels are created equally. There are a host of factors that effect the final image quality a digital camera can produce: image sensor size and type, processor type, compression, lenses, image stabilization, who is taking the picture…. So while it’s worth noting that a camera is capable of producing images of a certain size at a certain pixel count for reference, there are far more important factors to consider. In short, while a 10 megapixel point-and-shoot camera sounds kickass, it’s likely unable to produce images anywhere near the quality of some 5-megapixel DSLR cameras—even those that may be more than a few years old.

Not if you’re only listening to music. Unless you’re a home theater junkie, a devout gamer or an audophile with a DVD Audio or SACD player, a surround sound system may just be another underused item to clutter up your den—99.9 percent of music media isn’t recorded or encoded with surround sound information in the first place, so any “surround” effect is artificial. Not that there’s anything wrong with that if it floats your boat, but don’t be fooled into upgrading your sound system under the guise that you’re missing out on precious sound quality that isn’t actually there. Pony up for a nice pair of speakers instead and, if you’re feeling ambitious, a subwoofer.

Turning on and off your PC will shorten its life

Perhaps, if you’re flicking it on and off like a kid first discovering a light switch, but this urban legend seems to be crafted for those who just can’t wait the extra minute for their PC to boot up every morning. The phantom “surge” of power you’ve been warned about is sheer poppycock. Some components of your PC do have a fixed number of start-stop cycles, but they’re so far beyond the likely lifespan of other parts of your computer that it’s inconsequential. I mean, your hard drive is gonna crash any minute! Besides, you probably upgrade every three years anyway….

This one is a little more speculative, but as extremely high-priced SSDs are quickly making it into the mainstream market as a replacement for mechanical hard disk drives, I’m a little skeptical of the hype. I’m a huge fan of the promise of SSDs—drop-proof data, vastly increased battery life due to low power consumption, faster response time—and believe they’re the future of storage media. So far though. the future doesn’t seem like right now, if you’ve followed recent reviews of SSD-equipped laptops like the Sony Vaio TZ or especially the MacBook Air, which a few reviewers have found gets nowhere near the touted “5 hours” of wireless web access and actually ran slower than the hard disk model in some tests. Some consumers may find the extra grand or so for the upgrade to a smaller drive worth it, but for now this one doesn’t seem ready for prime time yet.

What other tech-related myths am I missing? Create an account if you haven’t yet and hit the comments with your expert insights and advice.