While tech pundits chronicle the saga of Open Computer, you could be making one 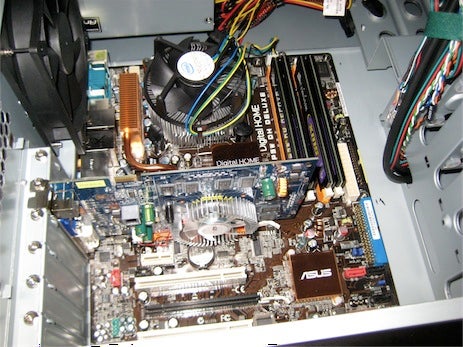 The Web has been abuzz this week with speculation about the company Psystar, which recently appeared out of nowhere offering (for just $399) a PC called the Open Computer that runs OS X Leopard.

According to Psystar, the base configuration for their machine includes a 2.2 GHz Intel Core Duo processor, 2GB of memory, integrated Intel GMA 950 Graphics, 20x DVD +/-R SATA drive, four USB ports, and it comes preinstalled with Leopard. Sounds pretty sweet,right? …Except for the fact that it’s technically illegal to run Apple software on non-Apple equipment.

Something smelled fishy to tech reporters who had never heard of the manufacturer, so they began researching the identity and origins of the mysterious Psystar Corporation. The Guardian reported that they were unable to get answers to basic questions about the company from the contact listed online, that the headquarters had actually moved twice in a 24 hour period, and that there were no Google results for Psystar prior to this week. And earlier this week, the online store at Psystar.com suddenly shut down due to “problems with its ecommerce system.”

Apple has kept mum about the whole thing despite Psystar’s defiant (and inaccurate) statement that Apple is acting as a “hardware monopoly.” The Psystar Web site states: “Psystar has assembled a system that is completely operational with Leopard called the Open Computer. We call it the Open Computer to reflect the opening of what has previously been a hardware monopoly,”

While the controversy shakes out (Will customers get their Open Computers? Will they work? How long until Apple gives Psystar the smackdown?) we’ve got a suggestion for Leopard-loving scofflaws. Rather than buying an Open Computer, you could just make your own. A while back, Lifehacker posted some very thorough instructions for building a “Hackintosh” and while the parts will run you close to $800, you will at least be guaranteed an actual, physical computer. However, if you’re not up to the hack and that $399 is still burning a hole in your pocket, my uncle’s got some land in Florida you might be interested in…