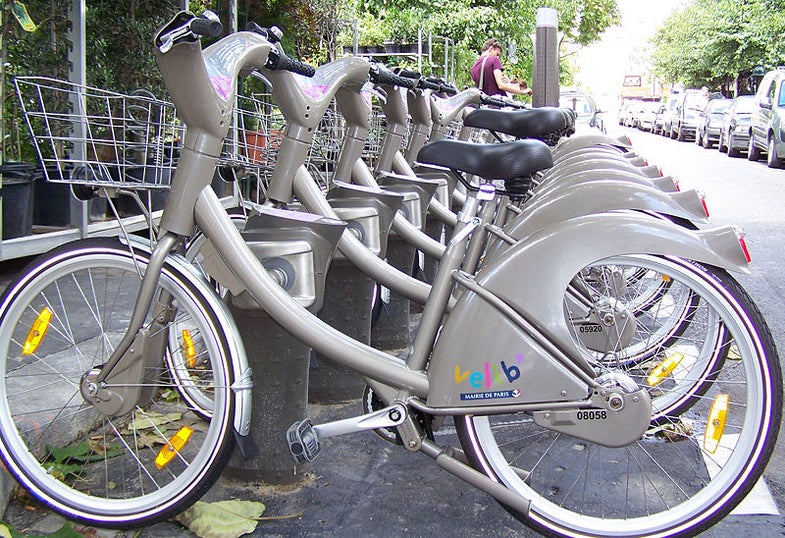 While the news that Mayor Bloomberg’s plan for NYC congestion pricing was defeated is something of a low point for urban cyclists, that coming out of Washington, D.C., is much more encouraging. Next month D.C. will become the first U.S. city to launch a public bike sharing venture like the wildly popular Vélib (short for “vélo liberté”) program in Paris. One hundred and twenty bicycles will be available at 10 central locations for an annual membership cost of $40. Users will be able to check out bikes for three hours at a time from 6am until 10pm (and returned at all hours); a fee of $200 will be levied if the bicycle goes unreturned after 48 hours. There is a point-based system of demerits for late returns, which can lead to losing one’s rental privileges.

The pluses: the bikes appear to have full chain cases, fenders, and skirt guards, which allow a rider to wear a dress or a long overcoat and not have to worry about it getting sucked into the spokes of the rear wheel or marked with grease from the cranks. They make a huge difference if you want to ride to a formal event or anything during the winter. They’ve also got dynamo lighting, which are active lights powered by tiny generators in the wheels—no batteries to worry about and many times more effective than reflectors.

The minuses: The Vélib operation in Paris reports that 25% of its total use is during the hours of 9pm – 3am. With the D.C. program stopping check out at 10pm, it effectively cuts out the young, late-night crowd, who as the Paris numbers demonstrate are not an insignificant ridership.

The cost of the program has been covered by a partnership with Clear Channel Outdoor, who in exchange for funding much of the program have been given exclusive advertising rights to the bus shelters around D.C.