The Phone Wars: Android vs. Apple 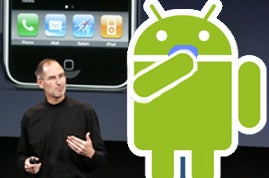 At this point we’ve known for a while that the much-talked-about gPhone isn’t actually going to be a single device, but a whole slew of them running Google’s Android platform, but that doesn’t mean the buzz is dying out. Now CNET says there’s a new race heating up, as Google and Apple vie for the attention of independent software developers.

Google made some noise when it announced its Android Developer Challenge, a $10 million, X Prize style contest, to motivate developers to build cool tools to run on Android. Then a famous VC firm swooped in and announced a $100 million pool for developers working on iPhone extras. Apple’s other advantage? Well, the company actually has a phone out there, with millions of users. This has motivated some developers to adopt a wait-and-see approach with Android, and stick to focusing on the iPhone.

Still, it should be interesting to see how this plays out in the next year. CNET has an interesting look at the competition, including details about a few of the developers on both sides, here. Hopefully we the consumers will be the ones who will benefit.