Peter Semmelhack freaks out the freaks at SXSW Interactive 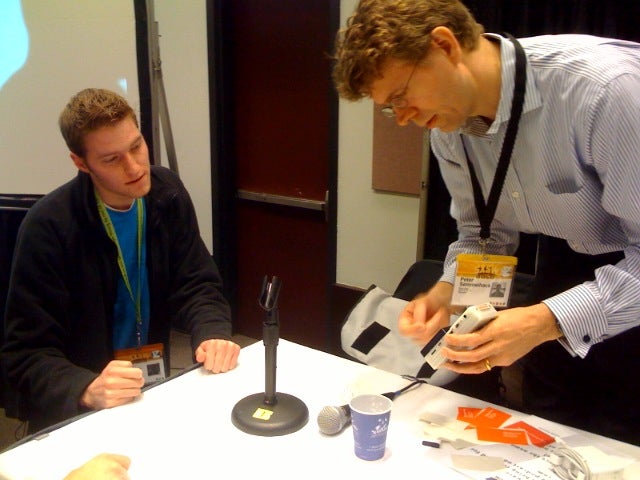 You’ve never seen a group of programmers and designers flip out over someone like they did over Peter Semmelhack, CEO of open-source gadget company Bug Labs, at SXSW this morning. (That is, unless you were at Jonathan Coulton’s show at the PopSci.com party last night. Grown men pulling their thinning hair and jumping up and down, that sort of thing. But Semmelhack’s crowd came close, and they were sober.)

Semmelhack’s company will be shipping its mix-and-match system of customizable, modular gadget parts (a camera, a GPS and wi-fi unit, touchscreens, etc) on Monday. (PopSci is also holding a Build-A-Bug contest — contribute your own design using the Dragonfly SDK.) Today he explained his frustrations with the consumer electronics industry (prohibitive economics, slow and clunky proprietary development, a million hostile and unmotivated partners to negotiate with) and how those frustrations led him to believe that gadget design should be more like open-source software design (build or adopt a source code, pick a platform, draw on a community of friendly developers, tailor it to a CPU, peripherals, etc, and release).

His company is attempting to create a hybrid of the two design traditions. He cited the example of the Lego Mindstorm system, whereby amateur engineers use Lego’s robotics platform to build their own automatons, and the company takes care of all the pain-in-the-ass details of suppliers, vendors, distributors, etc. Need a part? Lego will just fabricate it for you.

Same deal here. At the end of the presentation, Semmelhack did his quick-and-easy demo, swapping between modules to make a motion-sensing camera, a GPS alarm clock, etc. When he explained that the GPS alarm clock was the invention of a train commuter who kept sleeping through his stop, everyone laughed appreciatively. When he revealed that every module has its own IP address, and that as a result you could conceivably network together the functionality of your friend’s GPS, your other friend’s camera, etc, people gasped like startled schoolchildren. When he took the crowd’s picture and it instantly appeared on the Internet via a projected browser behind him, the crowd screamed and threw its hands in the air.