The boxy, inefficient and vampiric power adapter may have finally met its match 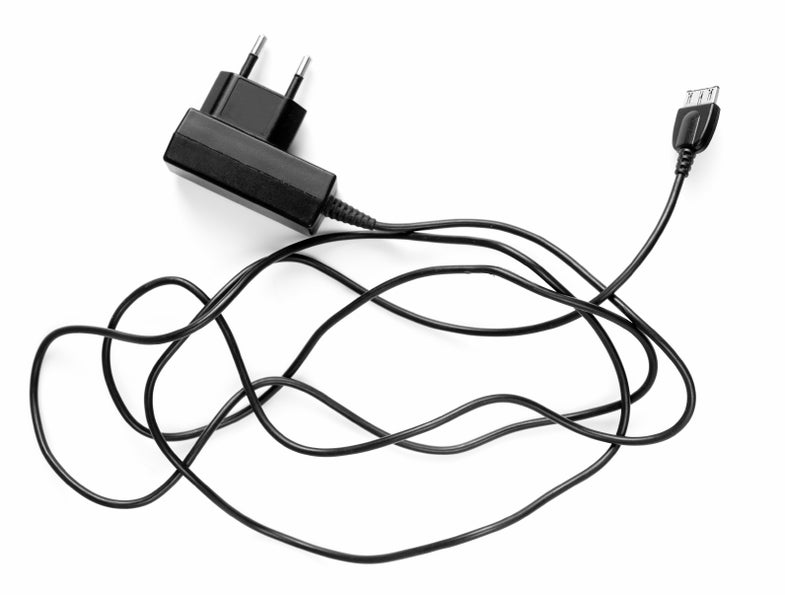 I have a confession to make: I am an addict. I’m strung out, my friends, literally—surrounded by the paraphernalia of my drug of choice, electricity. My apartment is a sickening jumble of daisy-chained power strips and extension cords, all supporting my particular addiction to wall warts—those power-squandering, space-wasting, chunky black power adapters used to juice my gadgets. I’m not about to give up all my electronic gear—no sir, that’s not an option—so I’d like to offer a compromise. A methadone treatment, if you will allow me to stretch this already thin metaphor.

Wall warts are the curse of our electronics-obsessed age, and it defies reason that we still live with them. In simple terms, they transform the high-voltage AC electrical current from your home to the lower-voltage DC current needed by virtually all our consumer electronics—cell phones, PDAs, PC speakers, cordless phones, printers, external hard drives, WiFi base stations, etc. They exist to allow manufacturers and designers to make our favorite devices smaller and more portable, and to do so cheaply.

The size-for-power tradeoff seems necessary, yet the downsides are immense: these little black boxes are at best 75 percent efficient, and often as low as 20 percent, which means that anywhere from 25 to 80 percent of the juice they consume to power or charge our favorite devices is wasted. And many of them are also electricity “vampires” that continue to draw current even when they aren’t being used. That may not sound all that meaningful until you tally up the impact of the 1.5 billion wall-wart powered devices we collectively use in the US and realize that together they account for between 5 and 11 percent of our total national electric bill (a good portion of which, as we’ve just learned, is straight-up waste).

And they’re also just an aesthetic nightmare. They’re typically heavy, take up a lot of space, break or burn out easily and are ugly to look at. So what’s the answer? A revolution!

Before I get up on my energy soapbox again, though, let’s look at some practical short-term remedies that have left me better off, albeit ever-so-slightly, than before:

Since the vast majority of standard power cords and wall warts in my household are centered around my PC (the PC itself, a scanner, a printer, two external hard drives, a monitor, a modem, speakers) I go with a pair of power strips: one for the devices I use almost constantly and so generally leave on; the other for devices I rarely use and so can flip a single switch to turn them all off at the same time. I prefer the Power Squid—it’s a power strip with 5 individual cords for devices, and so accommodates power bricks of all shapes and sizes.

The other option I’m testing now for use with all my AV equipment is a Smart Strip, a power strip/surge protector with a couple of dedicated, always-on outlets, a “control outlet” and a series of corresponding switched outlets. The Smart Strip senses when a device plugged into the control outlet is turned off—say, my TV—and then automatically switches off devices plugged into the other corresponding outlets, like my XBox, DVD player and sound system.

I’ve also looked at multi-use switchable DC adapters, but I’ve found that they really don’t accomplish much. You still get a drawerful of wall warts and are left with a tangle of cables and the process of plugging and unplugging devices.

Unfortunately, that’s about the practical limit of what we can do with our warts these days. Crappy huh? So I propose the following pie-in-the-sky ideas, and leave it up to you armchair electrical engineers to accomplish them (or suggest your own solutions in the comments section).

As a Band-Aid remedy, give me a power strip/surge protector that’s built-in to, say, my PC monitor’s stand. That way I can turn on and off items I need with the flick of an easy-to-reach switch instead of lumbering around under my desk. I’m lazy and tend to forget to do it, so a glowing light in my face is a better option.

Formalize a standard plug for DC devices, like mini-USB, and have a small-form power strip with several mini-USB outlets with a smart, variable output transformer built in. So instead of having six adapters at one outlet as so many of us do, you’d have one unit that can sense the power needs of individual devices and output it accordingly. When an outlet isn’t being used, it would shut off.

And for a real humdinger, perhaps consider a new universal standard for smart residential electrical outlets—that is, do the above at the level of a home’s electrical system and eliminate power adapters from the picture entirely. Granted the argument could be made that the simplicity of our current system shouldn’t be futzed with, and that adding layers of complexity will only create opportunities for breakdown. But I’d argue though that consumer electronics are here to stay, will only increase in number in coming years, and that perhaps it’s time to address the problem of power management where it starts at the wall.