A Picture in Your Pocket 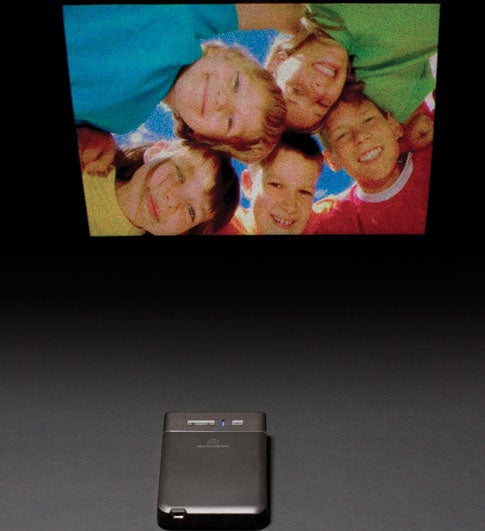 FULL COLOR By using three lasers, the PicoP projector creates a broader range of colors than most TVs can.

Your next cellphone could have a 100-inch screen–without getting an inch bigger. Microvision’s tiny PicoP projector can turn a wall, tabletop or any other surface into a display. It’s small enough to fit in pocket-sized gadgets because it uses lasers, which sip power, are extremely bright, and produce little heat. They also do away with bulky lenses: The pinpoint beams are always in focus, from any distance.

The PicoP forms images by mixing pulses of red, green and blue laser light and bouncing them off a vibrating, pinhead-size mirror that fills the screen one pixel at a time. To create standard-definition video, the projector draws 24.4 million pixels per second.

In a well-lit room, the PicoP is bright enough to display images up to about 8 by 10 inches. In the dark, it can fill a 100-inch screen. Yet the projector itself is about the size of a stack of three camera memory cards (0.26 by 0.79 by 1.57 inches). At first, it will be bundled with a battery inside an iPod-size device, currently called the SHOW, that several companies plan to sell before the end of the year. By next year, Microvision expects the projector to be built directly into phones, the way cameras are today.