We use the latest and greatest gear to assemble a tricked-out home flight deck. Our inspiration? An Australian hobbyist's $230,000 747 sim that's identical to the real thing-down to the very last knob

For a closer look at the individual pieces of our setup, launch the photo gallery

It´s a big year for flight-simulator buffs. New versions of the two most realistic virtual-flying programs are coming to home cockpits. Laminar Research´s X-Plane 8.5 ($70; x-plane.com) for Mac and PC now includes real-world scenery for most of the planet. Microsoft´s PC-only Flight Simulator X ($70; microsoft.com) has more than 50 new missions, in-flight emergencies, and busy airports clogged with fuel trucks and baggage carts. To really ratchet up the realism, though, you´ll need a fast computer, a big screen, booming surround sound, and lots of switches and knobs to play with. Step into your virtual cockpit by launching the photo gallery here.

Not real enough you say? Check out the homemade $230,000 747 sim built by Australian hobbyist Matthew Sheil by clicking through to the next page.

One day Matthew Sheil´s Boeing 747 is dodging houses on the approach into Hong Kong, the next it´s shaking like a baby´s rattle in a storm over the Atlantic. But Sheil does it all at a cruising altitude of about nine feet without ever leaving a Sydney, Australia, warehouse.

An amateur pilot who runs a trucking company, Sheil has spent eight years building a flight simulator that precisely mimics a 747 cockpit down to the last dial, knob and switch. And flying it may be better than the real thing. It´s got real-time weather, the preflight safety lecture (recorded), air-traffic control (live, from other sim users), even Qantas Airways food-but crashing is less fatal.

Sheil foraged parts from all over the world and enlisted dozens of hydraulics and electronics experts to construct the 10-foot-long, two-ton monster. But work continues. â€It´s like a painting,â€ he says. â€It´s never done.â€

Brains: A rack of 13 computers runs the audio, motion and other systems, while DOS-based software and Microsoft Flight Simulator provide the flight data.

Visuals: A projector sits on a framework above the sim. Two 19-inch LCDs next to the windows provide left and right views.

Motion: A hydraulic motion system with its own pump room lets the pilot feel the bumps on the runway, the acceleration at takeoff, and the G-forces during turns. 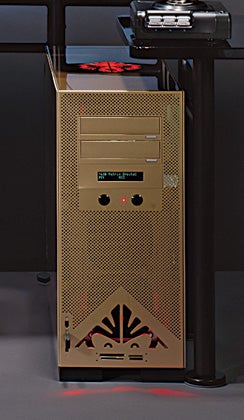 The four-processor Omen is the fastest home PC available. Its liquid-cooled dual graphics cards effortlessly render high-def scenery and can power up to four screens. $5,700; voodoopc.com 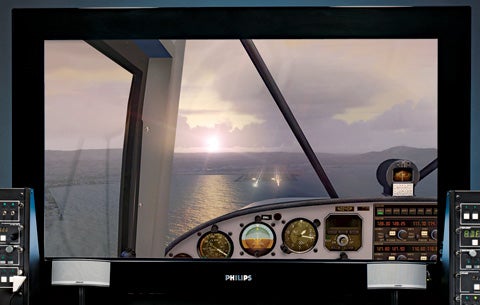 This 42-inch LCD has a superfast three- millisecond response time that practically eliminates motion blur as you quickly barrel-roll out of a dogfight. $2,600; [philips.com

This joystick and throttle have programmable buttons for oft-used controls, adjustable tension so you can tune the way they feel, and an LCD that displays flight data. $200; saitek.com