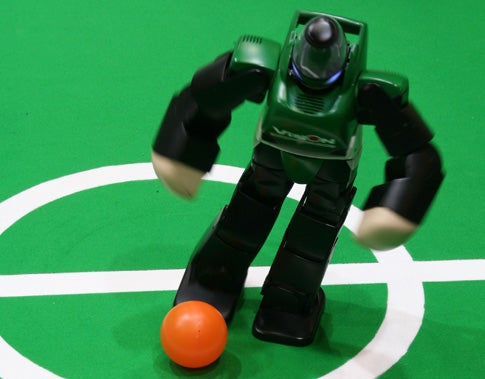 For a video of the soccer-playing bots in action, click here (WMV Format).

As World Cup soccer rages in Germany this month, 350 teams from around the world will convene in the city of Bremen to compete in the robotic equivalent, the 10th annual RoboCup World Championship. The goal, so to speak, of this event is highly ambitious: to create android athletes that could whip the human world-champion soccer team by the year 2050–and, along the way, advance the field of artificial intelligence.

David Beckham need not worry anytime soon. The players, which range from Sony Aibo dogs to dwarf-size bipedal ´bots, tend to topple easily, botch passes, and quit when their batteries run low. Still, by robot standards, they´ve got game: The humanoids can play a 20-minute match, replete with holding penalties and goal thrashing, and teams of networked â€bots can score without any human interference. Give them 44 more years of practice, and they might well be signing autographs, not to mention million- dollar contracts. Here, our favorite players.

The Player: The darling of the Small Robot League, this 8.6-inch-tall ´bot guides a golf ball around the field, executing plays sent from a sideline computer. Two cameras above the field track teammates and foes.

Standings: A strong competitor since 2001, Laval´s team of five networked ´bots are favored to win but will have to outmaneuver 27 other teams.

The Player: Competing in the Humanoid League, NimbRo is a 3.3-foot-tall, 11-pound autonomous bipedal that can run, dribble, kick, recover from falls, and strategize with teammates.

The Standings: Last year´s runner-up, this
veteran team is poised to dethrone the reigning champ Team Osaka in two-on-two matches.

Strength:
Greatest dexterity. NimbRo can
get up from falls quickly, thanks to attitude sensors, ultra-strong
carbon-composite feet and 21 actuator-controlled joints.

This reprogrammed Sony Aibo robot dog is our pick in the Four-Legged League. Like humans, the pooch masters ball handling through practice, using corrective software to learn from mistakes.

**Standings:
**
The first-time championship competitor is a true underdog. It will pit its four-dog team against 23 others, most of which will be led by robotics powerhouses.