A Display with a View 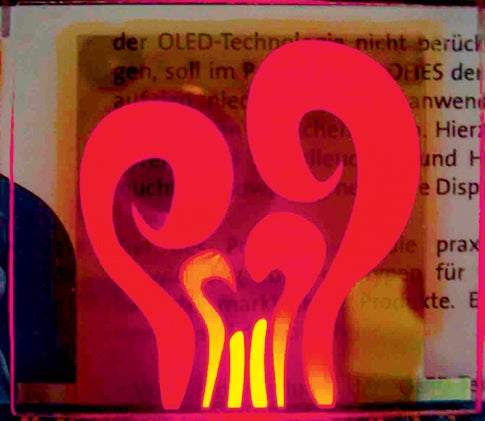 FINE PRINT: A clear OLED sits atop a book

Sleek, wall-mounted plasma screens might seem like viewing nirvana now, but what if a picture window could double as a flat-screen TV? Or what if your car´s GPS system could be displayed on your windshield? Researchers at the Fraunhofer Institute in Germany have invented a transparent OLED (organic light-emitting diode) that will allow just that, transforming any clear surface into a see-through display.

Hailed as the next big thing in the display world, OLEDs eliminate the need for clunky, power-draining backlights like those in LCD monitors and TVs. An OLED screen consists of a paper-thin electroluminescent film that glows when current is applied to it. Today´s OLEDs use thick electrodes to supply this current, making the display impossible to see through.

Fraunhofer physicist Armin Wedel´s solution: Replace the electrodes with a thin coating of metal oxide that conducts electricity yet is 60 percent clearer than its predecessors. Wedel´s new screen tech should appear in gadgets within two years.