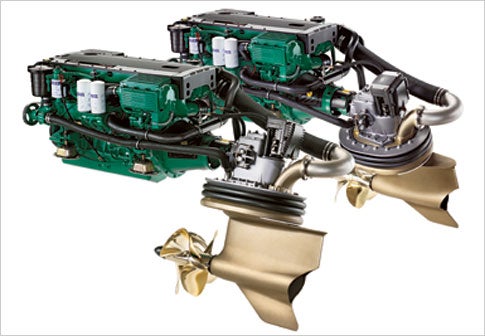 It’s faster, cleaner, quieter, more fuel-efficient and more responsive. The Volvo Penta IPS is the kind of radical but obvious leap that leaves you wondering why nobody thought of it earlier.

A pair of forward-facing, counter-rotating propellers-like those in certain prop-driven airplanes-are placed side by side directly underneath the engine. Rather than churning through water that’s been chopped up by the exposed shaft, the way most inboard boat motors do, the propellers pull on undisturbed water, which increases efficiency and speed by up to 20 percent. Microprocessor-controlled steering rotates the two propellers to point the engine’s thrust in the desired direction. It also eases docking: Instead of relying on a rudder, the propellers rotate sideways to slide the vessel into a slip. The Penta is now available in about a dozen high-end cruisers; expect a trickle-down by late 2006.