More storage for years to come 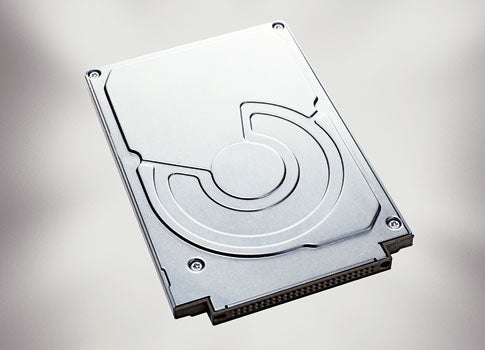 Imagine having a 10-gigabyte hard drive in your cellphone or a terabyte of space on your laptop. Perpendicular recording, a new way of writing data to
a hard disk, creates the possibility for these kinds of capacities, just as we’re approaching the physical limits of traditional recording methods.
Hard drives store information by changing the polarization of microscopic magnetic bits aligned end-to-end on a surface called a platter. But you can pack in only so many bits before they interfere with one another, randomly switching orientation and turning your data into noise. Perpendicular recording stands the bits on-end so that more fit into the same space. It sounds simple, but it took Toshiba 20 years to reengineer the drive’s innards to accommodate vertical bits. The entire hard-drive industry will go perpendicular within a few years, but Toshiba was the first to market with a 1.8-inch single-platter 40-gigabyte drive (previous 40-gig drives this size used two platters, burning more battery life) in its Gigabeat MP3 player.