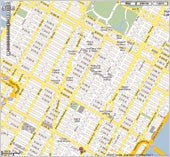 Mapquest and Yahoo Maps are slow. Google Local’s maps pop up almost immediately and allow you to click and drag to scroll around without waiting for a new page to load. Google bypasses the traditional bottleneck-building the map on a server and then transferring it-by instead sending your computer several small map “tiles” with instructions for assembly. When you scroll, it sends new tiles rather than a whole new map. Google also released the code behind the site, inspiring users to create dozens of applications with it, including chicagocrime.org, which plots reported crimes.