GPS is indespensable, but reception is spotty indoors and in urban areas. A new system that uses digital television signals should clear the way for anytime, anywhere positioning 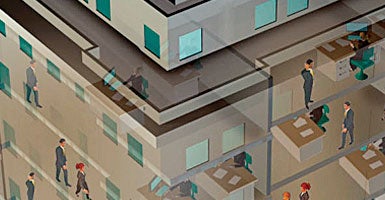 Today’s Global Positioning System is great for tracking tanks in the desert, but turn on your Garmin in New York City or inside virtually any building, and you’ll be staring at satellite static–GPS doesn’t perform well indoors or in urban canyons. Now a new technology is poised to pick up where GPS satellite signals cut out.

Developed by Rosum Corporation in Redwood City, California, TV-GPS, as the system is known, triangulates positions using television signals that are 2,000 times as strong as GPS satellite transmissions. With nearly 2,800 TV antennas concentrated mainly in U.S. metropolitan areas, where GPS coverage is weakest, TV-GPS has a ready-made infrastructure. The result is a 12,500-kilowatt locating system (GPS is about 500 watts) that can track Rosum’s patented chipset indoors, outdoors, in taxis, subways or almost any dark city corner.

So far, Rosum is working with GPS giant Trimble in Sunnyvale, California, to get its chip in semi trucks by early 2006 for fleet tracking. After that, Rosum will roll out TV-GPS applications to help the police track parolees and for 911 tracking in the next generation of portable voice-over-Internet devices. But the technology’s biggest break may come from Uncle Sam. Last December, President Bush put out a call for a backup locating system in case the aging GPS system, first deployed in 1978, fails. Rosum is betting its system fits the bill.

1. There are roughly 2,800 television antennas around the U.S. These wont have to be modified in any way for TV-GPS to work.

2. A GPS device, cellphone, laptop, PDA or other portable gadget equipped with a Rosum TV Measurement Module chip picks up television signals being broadcast in a given area, much like a typical GPS device picks up satellite signals. From these signals it triangulates its latitude and longitude.

3. Unlike the GPS system, TV stations dont have a common synchronized clock, which is necessary to give an accurate position. So the system uses a computerized monitor unit to track and measure TV signals.

4. The location server crunches data from the monitor unit and synchronizes the broadcast-channel clocks to determine the position of Rosums TV-GPS chips. It then transmits that location data to the chips.