"Rip, Mix, Burn" more than an Apple marketing campaign, it was a rallying cry that meant "Take control of your music!" Well, today the Supreme Court killed Rip, Mix, Burn, or at least the innovative spirit behind it. 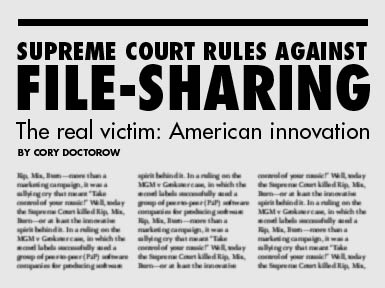 In the MGM v. Grokster case, several major record labels successfully sued a group of peer-to-peer (P2P) software companies for producing software that permitted copyright infringement (that is, online trading of commercial music) when the court believed that a different, less-efficient design might have prevented it. The justices ruled against P2P companies Grokster and Streamcast because they believed that the companies intended for their users to infringe copyright with their service. The key line from the decision: â€One who distributes a device with the object of promoting its use to infringe copyright, as shown by clear expression or other affirmative steps taken to foster infringement . . . is liable for the resulting acts of infringement by third parties.â€ But the judges don´t specify what those steps might be. In other words, if it can be shown that a company â€took any affirmative stepsâ€ to aid copyright infringement, it can be held liable. What legally constitutes an affirmative step? The court doesn´t say.

Burning a copy of a CD isn´t necessarily infringement, but it is if you give it to a friend, or maybe even if you loan it to her, so does the marketing phrase â€Rip, Mix, Burnâ€ qualify as inducement to infringe? Could Apple be sued? It´s unclear. But you can be sure that the in-house counsel at a technology company will err on the side of caution-as will the investors in every potential new garage start-up. Such seemingly innocuous statements as â€E-mail larger attachments with Outlookâ€ or â€Play MP3s on your Sony-Ericsson phoneâ€ could qualify as inducement to infringe under this ruling.

The second you show a hint of â€inducement,â€ you open your company up to having a court pick over the bones of every e-mail from every engineer, every call and every PowerPoint presentation, looking for evidence of thoughtcrime: Have you had a subversive thought while designing this? Did it ever occur to you that you could have made it a little clunkier and, in so doing, made it less infringing? Two companies that ship the same product face different liability based on whether one of them had an engineer who told her manager that she thought she could make it harder to infringe copyright merely by doubling the cost of development.
This decision won´t kill P2P sharing. Engineering students write P2P software in 11 lines of code as class assignments. Most Internet users use file-sharing software, and that´s not going to stop, no matter how many lawsuits the labels win against customers and companies. P2P will outlast today´s generation of technophobic record execs who are steering their companies to slow, spectacular suicide.

But what today´s decision will kill is American innovation. Chinese and European firms can get funding and ship products based on plans that don´t have to comply with this decision´s fuzzy test, while their American counterparts will need to convince everyone from their bankers to the courts that they´ve taken all measures to avoid inducing infringement. This is good news if you´re an American corporate lawyer but not if you´re an inventor creating a new way to enjoy content. Both sides went to the Supreme Court hoping for clarity on what is and isn´t legal in P2P, and instead the court tipped a fresh load of grenades into the decade´s most perilous legal minefield.