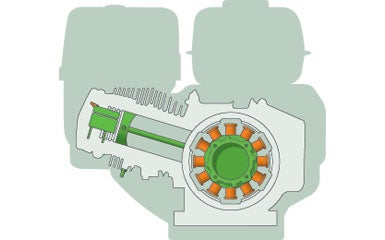 Car engines have been governed by computers for years, but Honda’s iGX440 (honda.com) is the first power-equipment engine with a microchip. The electronically regulated iGX440–which will show up in lawn mowers, water pumps and pressure washers later this year–runs at a constant engine speed even under changing loads. Thick grass usually causes mower engines to slow, bogging down whomever’s pushing the machine, but the iGX440 maintains speed, and thus power, by giving the engine more gas and manipulating ignition timing. In pumps, a water-level sensor automatically starts the engine when water levels are too high; in power washers, squeezing the trigger handle automatically starts and stops operation. Here’s how the Detroit-inspired power plant works.

Turning the engine on cranks the starter to open the fuel valve and activates the electronic control unit (ECU) (A), which closes the choke (B) before igniting the engine. When the engine warms up, a temperature sensor (C) tells the ECU to open the choke. The ECU receives an electric signal from the power coil (D) located behind the flywheel (E) to calculate revolutions per minute and monitors the angle of the throttle opening (F) to determine the engine’s workload. It maintains rpm at a preset level, keeping power constant by adjusting the throttle and spark-plug (G) timing.