With crime-fighting software inspired by evolution, a picture is worth a thousand . . . other pictures 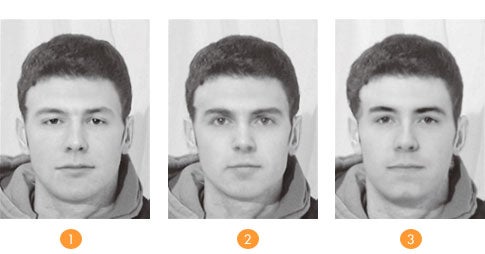 Have You Seen This Guy?

1.A volunteer was shown 70 faces on a computer and then asked to choose the six that most resembled Ben. This image is one of them.
2.EvoFIT merged the six faces, combining about 80 variables to generate another 70 headshots. The volunteer again selected six portraits.
3.The selection process continued until the software evolved a composite bearing an acceptable likeness to Ben. It took two hours.

As often happens during a crime, a victim gets only a brief glance at the assailant. Later, when police ask him for a description of the perpetrator, he
has trouble recalling details. But now, with new identification software developed by
two researchers in Scotland, victims no longer have to worry about describing their assailants. A computer does it for them.

The software, called EvoFIT, exploits the fact that the human brain is much better at recognizing a face than describing it. Unlike current identification systems, which require a witness to choose from a menu of features-say, a crooked mouth or a pointy nose-EvoFIT simply offers up a gallery of faces on a computer screen and then, based on witness
choices, ‘evolves’ a face that resembles the perp. It´s just selective breeding, says University of Stirling psychologist Peter Hancock, who developed the software with his colleague Charlie Frowd. You select the best faces and continually move toward your target.

The program works like this: Detectives show the victim a series of 70 faces selected for sex and race on a computer screen. Of these, the victim chooses the six that most resemble the suspect. Using more than 80 variables that relate to either facial shape or texture, the program merges, or ‘breeds,’ the selected images and almost instantly comes up with 70 variations of the original six. The victim picks another six faces, and so on. After four or five rounds, EvoFIT produces a portrait the victim recognizes. Then cops hit the streets.

So far, the new software has been used in just one actual police case, but Hancock and Frowd have teamed up with ABM, an identification-software firm in Nottingham, England, to market EvoFIT to police in the U.S. and Europe. Purse snatchers take heed.