Hang On for Your Life! (Forget Your Lunch) 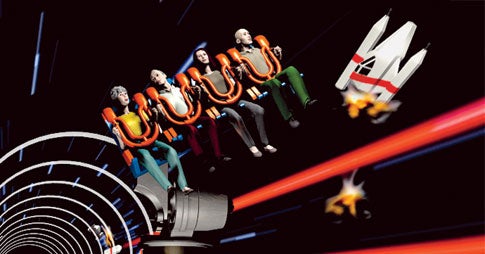 You are dangling like bait at the end of a 22-foot-long robotic arm, and it looks and feels exactly like you’re zooming through space. It’s tempting to gaze at distant planets, except that an asteroid as big as a house is hurtling toward you. Just before impact, you blast it with a phaser cannon while executing a series of buttery barrel rolls to avoid the debris. The asteroid bits pelt your ship, rattling you to the marrow. Then, without warning, you’re sucked through the blackness of a wormhole–back into reality.

This is the future of the roller coaster, as told by a jolly 46-year-old Brit named Gino De-Gol, founder of an unusual company called RoboCoaster. What fuels his ambitious vision is a belief that the all-American icon of thrill, circa 2005, is fundamentally a one-trick pony. “You are stuck on a track, you know exactly where you are going, and the ride is always the same,” De-Gol says in mock exasperation. What he has in mind is a hybrid ride, one that combines the high G-forces of today’s coasters, the computer-generated trickery of virtual-reality simulators and, eventually, the interactivity of videogames. Propelled through a snaking series of domed theaters, riders will swing far out into a computer-generated universe to come face-to-face with aliens, navigate a pulmonary artery or, if they’re so inclined, chase butterflies through the forest.

In 2002, two years after quitting his engineering job at KUKA Robotics, Europe’s largest industrial-robot manufacturer, De-Gol wowed the amusement industry when he installed the world´s first passenger-certified robot at Legoland in Denmark. His innovation– He attached a double-seated chair to the end of a KR 500-a 5,000-pound aluminum robotic arm more commonly found lifting Mercedes-Benz engines so they can be spot-welded. The arm’s six joints allow it to move any which way imaginable. Using a touchscreen, riders built their own thrills, choosing among barrel rolls, corkscrews and inversions. But with the robot bolted to the floor, De-Gol says, his first RoboCoaster was “more like a really wild bull ride.”

Now he wants to mount KR 500s to a track and speed them along one after another. Propel a rider on a twisting, undulating trip while shaking him like a cat would a rat, and you greatly compound the physical stimulation. Which brings us to the project’s highest hurdle: the upchuck factor. If your inner ear and your eyes send conflicting messages to your brain about your body’s position–say, an alien lands on your ship, but the ride jerks a tenth of a second later-the illusion is shattered, and your body could revolt. Paul Evans, a mechanical designer at the engineering firm AMEC Dynamic Structures, which is partnering with RoboCoaster, is programming a series of KR 500 maneuvers to match, frame-by-frame, a 3-D film of a roller coaster ride, in large part to determine which moves are too . . . sick. “We don’t exactly know what the human body will tolerate when we combine extreme movements with 3-D imagery,” he says. The amusement-park industry doesn´t keep tabs on nausea, though, so how will De-Gol ensure that his ride is thrilling and enjoyable? “Guest satisfaction cards will tell us a lot,” he enthuses. “The beauty is that we can simply go in and reprogram it.”

The Road to Thrills

John Miller patents “under friction wheels,” which grip coaster rails from the bottom , side and top, thus preventing cars from derailing. Now designers are free to create hairpin turns and sleep drops while keeping the cars on the track.